Home Biotech News Who Are COVID-19 Superspreaders? Are Some People More Infectious Than Others?
Facebook
Twitter
WhatsApp
Linkedin
Email 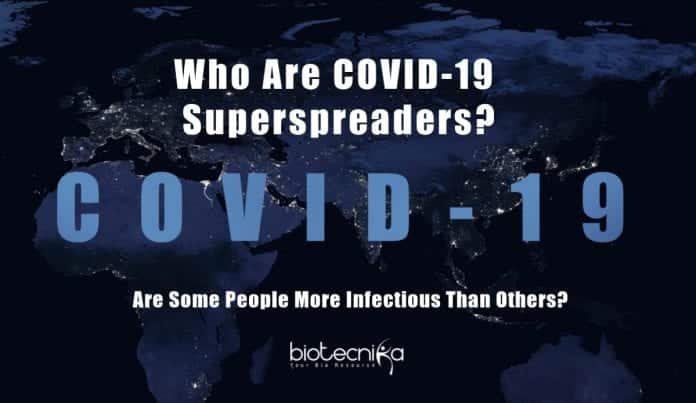 COVID-19 Superspreaders
Are Some People Infectious Than Others?

Every day, a large number of people are getting infected with the novel coronavirus as it continues to spread across the world. No one can tell if a person crossing paths with you is carrying the SARS-CoV-2 virus or not as the pandemic continues.

Scientists have now discovered if there are people who are more infectious compared to others, according to a report in the Chicago Tribune.

The people who are more infectious compared to others are called “Superspreaders.” People who infect a disproportionate number of individuals are defined as superspreaders. It can be a consequence of simply being in the wrong place at the wrong time or social habits or genetics.

Researchers say that “superspreading epidemic events” could be driven by or further worsened by those who carry the virus. Thus, figuring out ways for identifying spreading events or how to prevent situations such as crowded rooms, where there are chances of superspreading to occur, is very crucial.

Identifying the people who are infected but are unable to spread the disease is also equally important, stressed the scientists.

At the University of Michigan, an epidemiologist, Jon Zellner, said that in a location

where an outbreak is happening, a big difference in easing the rate of spreading could be achieved by identifying those people who are more contagious than others and those less infectious. While dealing with a superspreader, contact tracing is an essential tool. However, it could be a waste of time and resources if it is conducted on a person who does not seem to transmit the virus to others. Zellner said, “We do not necessarily know who those people are, and that is the tricky part.”

At the University of Washington, an emeritus professor of statistics and sociology, Martina Morris said that there are two factors at play affecting the superspreaders. She said, “In order to transmit an infection, there has to be a link between people. However, the link is insufficient though it is important. How infectious an individual is would be the second factor. On these two things, we almost never have independent data.”

She stressed that, even when the spread has nothing to do with a person’s infectiousness when a person is exposed to public attack, it can be easy to misattribute multiple infections to that individual. She said, “You will look like a super-spreader if you are the first person in a crowded room to get infected and if this is an easily spreading disease. However, here, you were just the first in line, while anybody in that room would have had the same impact.”

But still, large outbreaks have been caused by a few individuals in some instances. At Resolve to Save Lives, the former director of the Centers for Disease Control and Prevention and chief executive, Dr. Thomas Frieden said that in the case of Covid-19, it is still unknown if individuals with silent infections who do not realize they are sick are also included under those highly infectious superspreaders.

Or, people who shed an unusual amount of virus could also be involved. Due to the variations in the virus content in the patient’s cough’s aerosol droplets or the amount of virus in feces, this is a poorly studied factor.

He said a superspreading event, due to any reason, can be prevented by public health measures such as cough hygiene and avoiding crowds.

In medical history, there are a number of instances of superspreading in outbreaks of measles, parasite diseases, tuberculosis and, other illness. Some of the instances are:

MERS: In a recent paper, an immunologist and virologist at the Chinese Centers for Disease Control and Prevention in Beijing, George Gao wrote, “In South Korea, approximately 75% of MERS-CoV cases can be traced back to three superspreaders who have each infected a disproportionately high number of contacts and were the primary source causing the MERS-CoV outbreak in South Korea.”

SARS: During the SARS outbreak in 2003, at least 125 individuals were infected with the infection by the first patient in Hong Kong appears. 22 people on a jet from Hong Kong to Beijing and 180 people in a housing complex in Hong Kong were involved in other superspreading events.

Ebola: Around 61% of infections of Ebola were traced to just 3% of infected people during the Ebola outbreak in Africa between 2014 and 2016.

Superspreading also appears to have driven the Covid-19 Outbreak

A couple in Illinois show a striking example from the far end of uninfectious, in the Covid-19 pandemic. In the state, the first laboratory-confirmed case of COVID-19 was the wife who had returned from a visit to Wuhan, China, on Jan 23. Her husband was infected on Jan 30. In the United States, this was the first known person-to-person transmission. The couple was hospitalized as they became gravely ill. However, both of them recovered after treatment. Around 372 people, including 195 health care workers, were traced as their contacts by the State public health officials, and not a single one was infected with the virus.

The chief medical officer for the Chicago Department of Public Health, Dr. Jennifer Layden said, several factors might have contributed to the remarkable lack of spreading. Were the people they interacted with simply less susceptible to infections? How close were the contacts? Were they sneezing or coughing? Where were the couple in the course of their infection when they came into contact with those other people?

A medical historian at Columbia, Samuel Roberts, said, “Finding patient zero would only stoke fear of the other and it is not going to help. It is more important to see how we can protect ourselves.”