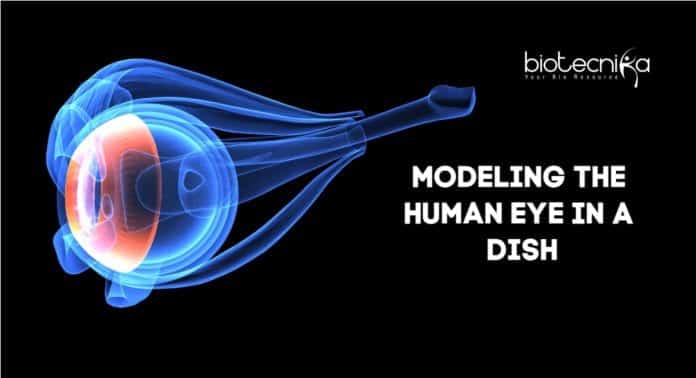 The eye is one of the most complex organs of the human body regardless of its small dimension relative to the rest of the body and it has actually been hard to research in a laboratory. A novel method to model eye development and disease has been developed using human induced pluripotent stem cells (hiPSCs) by the researchers from Osaka University. How tracking the expression of PITX2 protein in developing hiPSCs allows the isolation of a group of cells that play vital roles in eye development, biology, and related diseases was demonstrated in the study which was published in the Journal of Biological Chemistry.

Human-induced pluripotent stem cells have been used since their exploration over a decade back to replicate human biology and disease in a laboratory without the need for animals. The modernized usage is accompanied by the possibility of genetically altering the cells conveniently to research the function of proteins. Many cellular models of different organs have been developed using hiPSC to date, but the recreation of eyes has been more difficult due to their heterogeneous and complex nature.

Ryuhei Hayashi, the corresponding author said, “The model of eye is more difficult

to recreate in the lab due to the existence of heterogeneous cells in the eye.” He also added, “The objective of our research was to utilize hiPSCs to develop a unique human cellular eye model that will enhance our understanding of how the eye is formed from various cell types.”

To attain their objective, the team established a reporter cell line by modifying hiPSCs utilizing genome editing technology, such as whenever the cells express the protein PITX2, they will express the fluorescent protein eGFP. A crucial role is carried out by PITX2 throughout the embryonic development of many organs, including the eyes, PITX2 is a transcriptional factor protein. PITX2 is particularly expressed in periocular mesenchyme (POM), as well as in muscle cells and connective tissue within the eye. The scientists were able to fluorescently label POM cells by utilizing genetically modified cells.

Toru Okubo, lead author said, “We wanted to know whether the new cellular model had the ability to recreate elements of eye development and have isolated the POM cells for characterization.

The researchers initially revealed that the modified hiPSCs maintained the properties of pluripotent stem cells in the same way as the unchanged hiPSCs as they stayed pluripotent even after genome editing. The researchers formed a self-formed ectodermal autonomous multi-zones (SEAM), tissues containing various eye cells that form during eye development by inducing the development of POM cells from hiPSCs which was first reported in 2016 by Hayashi’s team. This new generation of gene-edited iPSCs made it possible for the researches to separate POM cells precisely from the SEAM as there were no previously known methods to separate POM cells. The researchers were able to reveal that POM cells maintained known molecular markers during the cell culture by separating the fluorescent POM cells from other non-fluorescent cells, which helped in validating the recreation of eye development using their hiPSC reporter cell line.

Hayashi said, “This study shows how human stem cells can be used to know the disease processes and development of eye”. He also added, “This model gives a chance to know how various facets of eye development take place.”