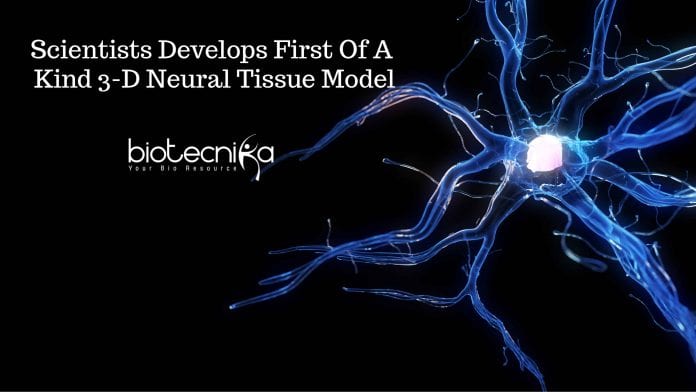 Gelson Pagan-Diaz-Diaz, the lead researcher, linked the 3-D model neural networks to a computer processing unit, which provided the basic principle to these supercomputers.

Pagan-Diaz said 3-dimensional tissue consisting of neurons could give scientists the ability to develop tissue models for drug screening as well as processing units for biological computers.

The brain is challenging to study in living humans. Being able to understand these networks develop using a 3D Neural Tissue Model promises to give scientists a new tool to better understand it’s critical function. These 3D models will provide insights into the development of deadly diseases such as Alzheimer’s. The 3D Neural Tissue Model will also reduce experiments on animal models.

The project was funded through an NSF Science and Technology Center EBICS- Emergent Behaviors of Integrated Cellular Systems.

In this research work, the team developed neural tissue mimics that can form various shapes. The scientists then used hydrogels and fibrin to make millimeter to centimeter-scale structures that do not consist of rigid scaffolds. Due to this feature, this 3D model can be molded into several desired shapes.

Besides drug testing, the University of Illinois scientists are especially interested in being able to recapitulate the way these networks might develop learning and memory.

Pagan-Diaz added that Being able to fabricate these tissue mimics outside the body allows us to characterize and study their electrical activity in great detail.