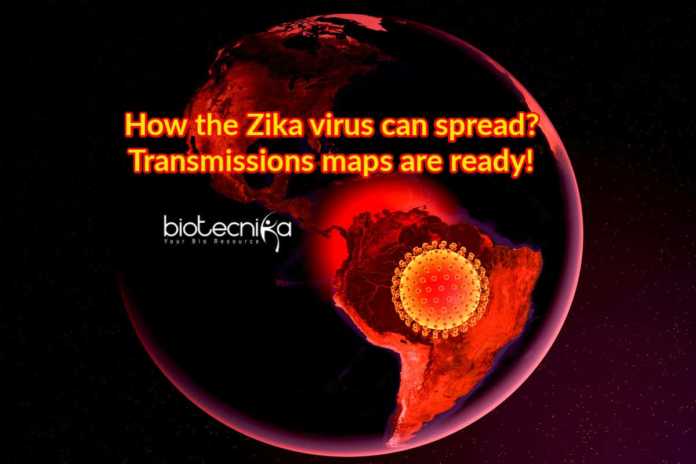 The spread of infectious disease, Zika, depends on many different factors. Even the environmental factors play a role, as do socio-economic factors. Recently, there were several attempts made to predict the transmission risk of the Zika virus at a global as well as at a local level, but the spatial and temporal patterns of transmission are still not well understood. Now, scientists from Goethe University and the Senckenberg Society for Nature Research in Frankfurt were able to generate reliable maps for the transmission-risk of the Zika virus in South America. The study has been published in the scientific journal PeerJ. Based on the models for South America, researchers will use the method to determine the Zika transmission risk for Europe as well.

Sven Klimpel Professor for Parasitology & Infection Biology at Goethe University in Frankfurt and the Senckenberg Biodiversity and Climate Research Centre said with their new modeling approaches it is possible now to illustrate the risk areas for Zika virus infections in Latin America regions. Klimpel added that the models additionally allows illustrating Zika risk areas for Europe. For example, their models indicate the 2 autochthonous cases in southern France in Département Var (see illustration). And at the end of October, French authorities announced the first Zika case in Europe; about a week later, a second Zika case was made public.

According to the scientists’ calculations, the Zika infection risk in South America is highest along the Brazilian East Coast & in Central America. The infection risk is moderate in the Amazon region and the lowest in the southern areas of the continent. The following countries are some of the especially affected countries according to the model: Brazil, Columbia, Cuba, the Dominican Republic, El Salvador, Guatemala, Jamaica, Venezuela, Haiti, Honduras, Puerto Rico, & Mexico. In Europe, a risk of Zika infection exists mainly in the Mediterranean region, but also in the inland regions of France & in the Rhine areas of Baden-Württemberg.

To determine the infectious risk of a specific area, the scientists Dr. Sarah Cunze & Professor Sven Klimpel modeled the potential spread of the 2 species of mosquito, Aedes aegypti & Aedes albopictus. Since the mosquitoes can only transmit this Zika virus in regions where the virus is present in the first place, the scientists included an Evidence Consensus Map in their risk model. This map could categorize the number of reported Zika illnesses at the regional level. And the average temperature of the warmest quarter was also incorporated in the model since the temperature has a significant influence on whether the virus can survive and then multiply in the mosquito. Finally, the researchers added socio-economic factors such as population density and gross domestic product to their risk model.