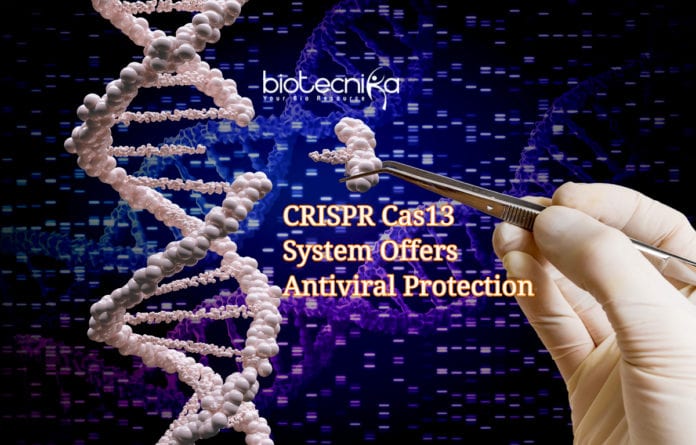 A recent study conducted by researchers at the Broad Institute of MIT & Harvard demonstrates that the Cas13 system, a class 2 CRISPR system, can actually be used as an antiviral system in cultured human cells. The study, published in Molecular Cell on October 10, suggests that the RNA-cutting enzyme can actually be programmed to detect and to destroy the RNA-based viruses.

The scientists believed that CRISPR effectors could be repurposed to help in defending human cells against both DNA & RNA viruses. Previous research studies have shown that cas13 of CRISPR possesses the ability to efficiently target and to cleave the RNA in several model systems, including the human cells. Moreover, Cas13 system orthologs have minimal off-target effects on the host transcriptome in the mammalian cells. Scientists investigated the utility of the Cas13 system for targeting human single-stranded RNA viruses computationally & then tested the CRISPR Cas13 system’s ability to inhibit the viral replication.

The need for new antiviral approaches is very urgent. And while over 90 anti-viral drugs have been approved and these treat a mere 9 diseases. Only 16 viruses have FDA-approved vaccines. And combined with the fact that viral pathogens evolve very rapidly and it gains resistance easily, concerns the scientific community.

Pardis Sabeti, the senior author of the study and an institute member at the Broad Institute and professor at Harvard University said the human viral pathogens are extremely diverse & they are constantly adapting to their own environment, even within a single species of virus, which underscores both the challenges & needs for flexible antiviral platforms. He added that their work establishes CARVER as a powerful and also rapidly programmable diagnostic & antiviral technology for a wide variety of viruses.

First, the research team screened a suite of RNA-based viruses in search of viral RNA sequences that Cas-13 could efficiently target. Researchers primarily looked for pieces that are both least likely to mutate & most likely, when cut, to disable an RNA virus. Then the team computationally analyzed sequencing data to identify thousands of potential sites, in hundreds of viral species which could serve as an effective target for Cas13. Next, the team engineered the Cas13 guide RNA for the system.

The newly programmed Cas13 was experimentally tested in human cells infected with lymphocytic choriomeningitis virus; influenza A virus; and vesicular stomatitis virus. 24 hours after the Cas13 system was introduced into the sample, the researchers observed up to a 40-fold reduction in the level of viral RNA in the culture.

Catherine Freije who is a graduate student at Harvard University said that Cas13could be used as a research tool for exploring many aspects of viral biology in human cells. Freije added that this could also potentially be a clinical tool, where CRISPR CAS13 systems could be used to diagnose samples as well as to treat a viral infection, & also to measure the effectiveness of the treatment, all with the ability to adapt CARVER quickly to deal with new or drug-resistant viruses as they emerge.