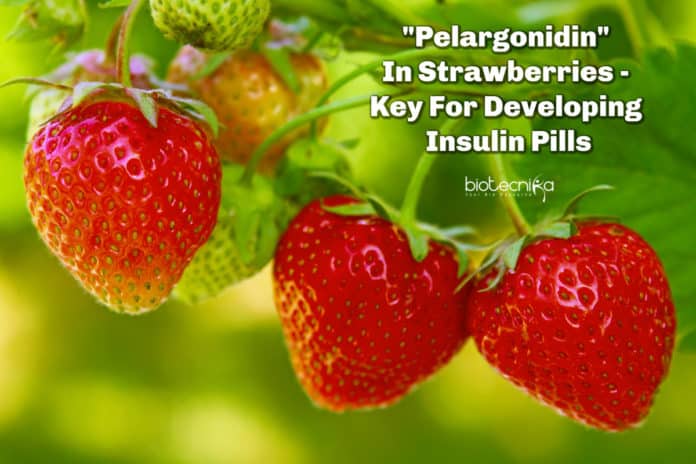 “Pelargonidin” in Strawberries may be key to developing an insulin pill

According to the recent survey, more than thirty million Americans suffer from diabetes and they have to inject themselves with insulin at least two to four times daily. Scientists have been looking for the ways to administer the medications orally, and scientists at Carnegie Mellon University have now shown that such a feat is possible with a novel “strawberry technology insulin pill”.

Professor Kathryn Whitehead, Chemical Engineering Associate, and her research team said the secret lies in an unlikely place: The strawberries and “strawberry technology insulin pill”. Nicholas Lamson, the research assistant said that the problem with insulin is that it is a protein. And our human stomach is very adept at breaking down these proteins the same as like with our food.

For insulin protein to be therapeutic, it needs to be absorbed intact by our small intestine. Scientists have developed the number of ways to encapsulate these protein insulin molecules so that these proteins can make it through the stomach to our small intestine. The problem here was, what to do with them once the pill is there has been the biggest sticking point. Allowing these proteins to pass into the small intestine fully undigested means the insulin molecule is too large to be absorbed through our intestine and then into the bloodstream. And when compounds already exist that can open the pores of the small intestine, few can do it without lasting any damages. The new “strawberry technology insulin pill” is one of that kind.

Whitehead said that they took around 110 fruits and vegetables and they were screened for an ability to open up those gaps between the cells of the intestine wide enough to allow this insulin to pass through it.

Here is where strawberries and “strawberry technology insulin pill”come in. The same chemical that makes strawberries red — pelargonidin — which can dilate the intestinal pores in a non-toxic way that later allows them to shrink back to the normal.

Combining this molecule with an encapsulated insulin package and voilà — an insulin pill which can help diabetic patients manage their blood sugar without any negative side effects.

The research team has proven the insulin pill’s efficacy in mice, but they believe that there is still a long way to go before this insulin pill with strawberry chemical is made available to the human diabetic patients.

Lamson said that a number of challenges must still be addressed, and one of the biggest among them is being the necessity of variable dosage. Diabetic patients must test their blood sugar throughout the day and also administer an insulin dose appropriate for their blood sugar levels by the patients. And it is a fact that this is easy to do with an injection, but it is much more difficult to do with a pill, Lamson added.

Whitehead’s lab has plans to extend its strawberry pigment technology to proteins other than insulin. This means the strawberry technology can potentially be used with other protein therapies too, many of which are used to treat disease conditions like leukemia, osteoporosis and even autoimmune disease. Undoubtedly, such an advance would revolutionize healthcare by removing the pain of injections and improving the daily lives of millions of patients.