Home Career Advice PhD In CSIR Labs vs PhD In Universities – Which Is Better? 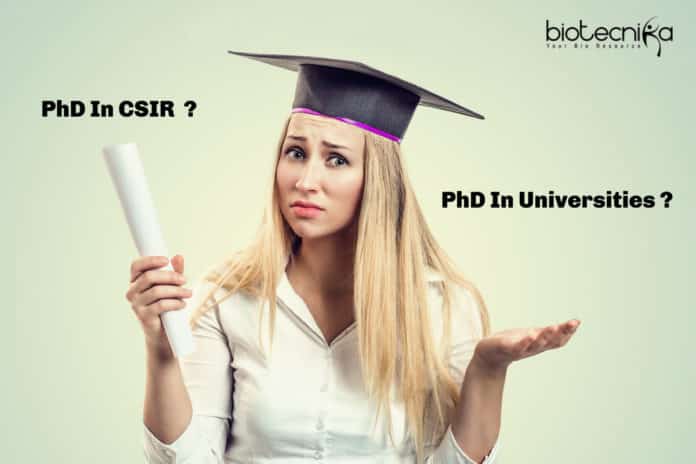 Disclaimer: This article only intends to compare Universities with CSIR Labs and not with IISC / IIT/ IISER. IISC / IIT/ IISER is not compared here with the CSIR LABS and we do not intend to offend anyone.

PhD In CSIR Labs vs PhD In Universities – Which Is Better?

The Indian higher education system is expanding at a phenomenal rate in the recent past. A Doctor of Philosophy or more often known as PhD is available in all subjects and is the highest level of academic degree a person can achieve. There is a rapid growth in the number of universities and research establishments which are producing PhD research opportunities. A common query which comes up to us is whether one should go for a PhD degree in any University or should opt for CSIR Labs. Well, this article is all about it – PhD In CSIR Labs vs PhD In Universities. We will be discussing both the aspects whether it is beneficial to do a PhD from a University or from a CSIR Lab. pros and Cons associated related to both is mentioned below. Do read till the end so that the information you gain is not half baked.

Lets first look into the CSIR Laboratories which we have in India and understand how it works.

Council of Scientific & Industrial Research (CSIR) was established in 1942 as an autonomous, non-profit organization. CSIR is the country’s largest public sector research and development organization, which employs over 4600 scientists. It runs 41 laboratories and 80 field centers where research and development are practiced in areas which cover a wide spectrum of science and technology. CSIR laboratories award PhD degree to the researchers through the Academy of Scientific and Innovative Research (AcSIR) – AcSIR PhD Admissions. Also, people who qualify CSIR NET exam can continue with their PhD degree from the Lab in which they are working in post formalities.

All these four types of universities total to 821 together.

For the sake of comparison let’s assess the pros and cons of both the University and CSIR laboratories for PhD in India.

1. Research interest– The Council of Scientific and Industrial Research (CSIR) established in 1942, is India’s largest research and development organization. CSIR is one of the prominent reasons for various scientific and technological advancement of the country. It has a pan-India presence with its contribution to research in various fields from its laboratories spread over the length and breadth of the country. The important aspect here is that each CSIR laboratory has its own specialized area of research, like the premier institute for molecular biology is Centre for Cellular & Molecular Biology (CCMB), Hyderabad (Andhra Pradesh). Physics-based research and development are being strengthened by The National Physical Laboratory (NPL), Delhi, likewise for toxicity studies, one approaches Indian Institute of Toxicological Research (IITR), Lucknow. This helps the prospective research scholars to choose for their laboratories which are specialized in their area of interest.

On the other hand, such a diverse area of research is limited in universities where there are few departments with a handful of professors interested in research.

2. Research facility– CSIR laboratories have very good research facility compared to central or other universities in India. CSIR labs are equipped with high-end instruments, techniques, expert technicians to operate the instruments and analyze the experimental results. There are different departments in a CSIR laboratory and each has its own instruments, therefore for a research scholar, it becomes very easy to perform his experiments and analyze the result even though the required instrument is not present in the same department.

On the other hand, universities often have centralized labs, which can be used by all the students on a shared basis. These labs may or may not be fully equipped with all the modern day research facilities, as universities also rely on grants.

3. Expert mentors– CSIR laboratories have renowned scientist working on current topics based on their specializations, though the best universities like JNU, HCU, also have dynamic professors who are highly qualified and perform good research work. Depending on the future ambitions of the scholar they can either go for CSIR lab or Universities, as CSIR scientists have a network of scientists with whom they are in contact. So, it is more advantageous for the PhD student as after PhD they can go for further Postdoc taking the help of CSIR scientist.

However, students get better exposure to teaching at Universities, where they also get a chance to take lectures as and when needed. This exposure is further facilitated in state agricultural universities where one student gets to know various fields during his 1.5-year-long study program during Ph. D.

4. Finance for the research– Finance is an important aspect for PhD research as in life science reagents, antibodies, instruments are very expensive but one cannot do without it. CSIR generates huge funds annually from the revenue generated through its research projects. Moreover, it generates additional funds through commercializing the technology or maintaining partnerships with industry. Therefore, CSIR labs do have a lot of finance for conducting research for PhD students so when one works in CSIR laboratory, the researcher’s work does not get hindered by the lack of funds and they can finish their PhD in the stipulated time. Though universities are equally good, in regard to generating revenue via product commercialization.

5. Fellowship– Stipends give confidence to the budding researchers as they can meet their daily personal and professional needs. Though fellowship remains the same for both the CSIR and University PhD students, nonetheless pursuing PhD from CSIR labs one gets the fellowship very quickly as the funding body and research lab is the same. There is no delay, as even if the fund has not been received by the concerned CSIR laboratory from CSIR still they disburse the stipend amount and later take the amount as and when the funds are received. While in universities the fellowship gets delayed. There is no such provision in universities to give the stipend before receiving the funds, this often demoralizes the students. Some Universities do have a different fellowship disbursement mechanism and they release the stipend on time.

6. Job prospects– Scientists in CSIR labs have wide contacts in the industry and academic field so after ones PhD they can even help their students to get a far better job than one can find on their own. Though university professors can also help their students for getting placed however their contacts are more limited to the academic field. To continue being into a research field the CSIR labs mentors are preferred over the professors at universities while to be in academics it is the other way round.

8. Recognition– In terms of recognition of the institute where one pursues PhD, here too CSIR bags the points as it is a well-recognized research establishment. PhD degree provided by AcSIR holds immense value when one seeks jobs compared to getting a degree from any private universities apart from very few prestigious universities like JNU, Hyderabad Central University and the University of Delhi.

9. Accessibility– CSIR has a resonant network with 41 research institutes/laboratories. CSIR laboratories are spread across India so it is more accessible compared to any particular university which is usually located in one particular state. Clearing one national level (Either of CSIR-NET, UGC-NET, DBT, ICMR) exam opens the doors to so many CSIR institutes while for pursuing PhD in universities one has to clear the PhD entrance exam for each University. However, there are certain universities like Central universities which have a common entrance exam. But again getting enrolled with a university for PhD also needs CSIR exam qualifications or related JRFs.

10. Nurturing scientific spirit– PhD inculcates scientific spirit among its researchers which is best achieved at CSIR labs, as these labs have the best infrastructure, embodied with 4000 research scientists and many scientific and technical experts which makes sure that their students become the best researcher while in Universities more focus goes to academics so PhD students even compromise their research hours for attending/ conducting lectures.

11.Safety of researcher– Moreover the government institutes like CSIR comply with regulations related to environmental health and protection, maintenance of facilities, safety and security, waste disposal, etc., which sometimes is neglected in universities. Implementing Good Laboratory Practices (GLP) is necessary and there are CSIR labs which are GLP certified.

12. Publishing research article– Though PhD scholars at both universities as well as CSIR labs would be interested in publishing their research work as this would help in fetching their degrees. But one would agree that CSIR labs are more into patent filing, technology transfer, as a result, many times the students work is not published while in universities the professors are more into publishing the manuscript. But there is one drawback that usually happens is, professors at universities prefer to be the first as well as the corresponding author for the students research article, so the researcher’s hard work is not awarded appropriately in universities while this is not seen in scientists from CSIR labs, they are only interested in being a corresponding author for the article so the students get full credit for their blood and sweat during their PhD tenure.

13. Attending foreign conferences– One working at CSIR are more inclined to attend international conferences for a paper presentation or poster presentation, as the scientists at CSIR encourage the students to do so. They either use their own contingency or write to funding agencies like UGC or DST to provide funds for their academic visits. These international exposures are seen less in universities as the professors are less likely to promote foreign trips for their research scholars.

14. Duration of PhD– Now this is what actually interests a prospective researcher. How much time it would take to finish with a PhD. Well, it is often observed that one doing PhD is universities usually get their degrees within 3-4 years while this is not so with CSIR laboratories. In CSIR there is a culture of retaining the PhD students for at least 5 years, they do not get their degrees before 5 years. The scientists have a notion that as fellowship is given for 5 years so there is no harm in getting the degree after five years.

PhD In CSIR Labs vs PhD In Universities : The conclusion is that every coin has two sides, so it is for CSIR laboratories and Universities. Both have their own strengths and weakness. Keeping the above points in mind one can decide whether to pursue PhD from CSIR laboratories or from any other university.

Disclaimer: This article only intends to compare Universities with CSIR Labs and not with IISC / IIT/ IISER.

IISC / IIT/ IISER is not compared here with the CSIR LABS and we do not intend to offend anyone.