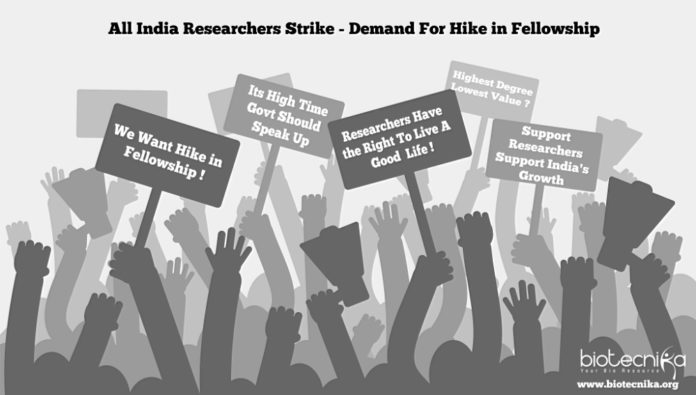 Nationwide Protests For Hike in Fellowship By Research Scholars

IISER Pune & National Chemical Laboratory NCL Pune Research scholars have joined forces with other scholars from leading institutes demanding a hike in fellowship. Lately Research Scholar community has been uniting on a large scale agitating against the Government in demand of a hike in the monthly fellowship. Recently, In Delhi, a large fleet of almost 1000 PhD scholars demonstrated together fighting for their rights to a hike in pay.

After a series of such events, silent strikes and demonstrations by the PhD scholars the Government has finally chosen to speak up. In response to a petition letter sent to the department of science & Technology (DST), Govt of India on 30th October 2018, Krishnaswamy VijayRaghavan, principal scientific advisor announced via a tweet that the demands and concerns of the research scholars are being considered seriously by the government.

As per Hindustan Times reporting Sachin Kumar Singh, a PhD student from IISER Pune said, “After we sent out the letter to the DST post the protest, we received a positive response to hold a meeting on November 6. We are hopeful that this meeting will reap positive results in favor of the scholars. Also, Shekhar Mande, the director general of CSIR, showed his support to our cause via social media. We hope the matter to reach a substantial point after Diwali.”

If we analyze the statistics of past increments in fellowship:

As per the above stats  there is a gradual increase in the fellowship every 3-4 years. But since then there has been no announcement yet on the increase in fellowship which is the major cause of this agitation across India.

The meeting of the cabinet was supposed to be held on 6th November 2018. No recent updates have been released yet from the ministry over the issue. The questions which lingers around right now is :

Please share your views below in the comment section. What do you feel the hike amount should be? If you have any other suggestions which might help the Govt take favourable decisions do share then below.