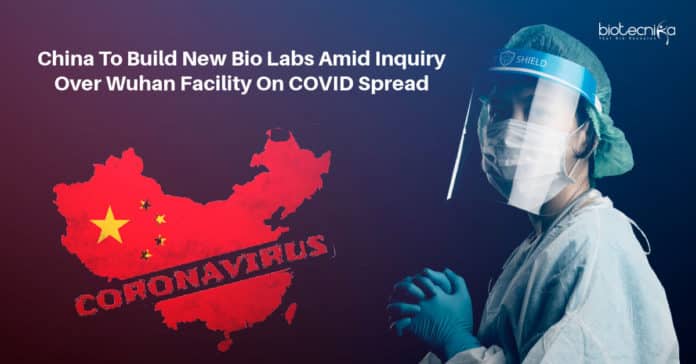 Among inquiries whether the COVID-19 pandemic arose from Wuhan’s lab, China has operationalized its new biosecurity law to defend the legal case for the institution and safe operation of more bio labs in the nation.

Turning everyone’s life across the world, the COVID-19 pandemic originated in Wuhan in December 2019.

Xiang Libin, Deputy Minister of Science and Technology, China, stated that as per the new Biosecurity Law, China would proceed to establish and authorize more laboratories specializing in superior pathogenic microbiology conscientiously and scientifically.

A BSL, or pathogen/protection level, is a collection of biocontainment safety measures needed to isolate hazardous biological agents in an enclosed lab.

Bai Chunli, president of the Chinese Academy of Sciences, stated that in April 2020, China had 2 P4 laboratories besides 81 P3 laboratories in functional or authorized for development.

Bio labs acquired significance as the United States has claimed that the COVID-19 might have originated from the Wuhan Institute of Virology, a P4 bio laboratory. However, China has strongly dismissed the charge.

A group of WHO experts, which investigated the origin of the COVID-19, concluded the previous month that “all hypotheses” included the assertion that COVID-19 might have originated from a bio laboratory “remained open.”

While receiving the report of the global specialists’ team which visited Wuhan,  Dr. Tedros Adhanom Ghebreyesus, WHO Director-General, stated that as far as the WHO is concerned, all theories continue to be on the table.

He further stated that this report is very requisite inception, yet it is not the end. They have not still ascertained the origin of the virus, and they have to proceed to adhere to the science.

Significantly, Mr. Ghebreyesus stated that the team has concluded that leak from the Wuhan Institute of Virology, as affirmed by Donald Trump, is the “least likely hypothesis,” yet it needs more exploration.

Additionally, the team visited many labs in Wuhan and examined how the virus entered the human population due to a lab incident.

He also stated that he doesn’t think that this analysis was comprehensive enough. Additional data and studies will certainly be required to reach more strong verdicts.

The WHO chief stated that although the group has concluded that a lab leak is a least possible theory, this needs more examination, perhaps with additional missions involving specialists, which he is ready to deploy.

Yang Zhanqiu, deputy director of the pathogen biology department, Wuhan University, stated that the law on biosafety is a prompt measure for China to show the development and management of biosafety laboratories and give a legal defense for scientific projects on biosafety, including contagious diseases, to be accomplished conscientiously and professionally.