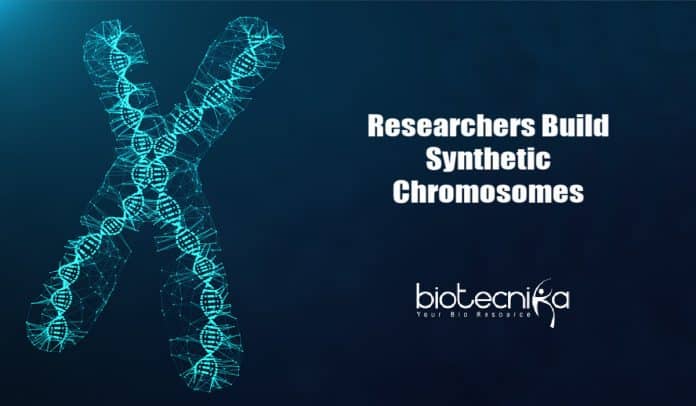 Scientists from TU Delft have created a synthetic chromosome in yeast. These artificial chromosomes can coexist with the innate chromosomes of the yeast as well as provide a means to easily and safely incorporate new beneficial functions to the microbe. Biotechnologists can employ artificial chromosomes to transform yeast cells into live manufacturing units with the capacity to produce valuable chemicals and even pills.

Scientists worldwide are attempting to modify yeast cells and many other microbes so that they can generate valuable products. In order to accomplish this, they need to make changes to the prevailing cell’s genetic makeup. For instance, they integrate a set of genes inside the yeast’s genome with CRISPR-Cas9 technology or repress the prevailing genes, hence eventually converting yeast cells into manufacturing plants that generate beneficial products.

The drawback of this approach is that it doesn’t enable the incorporation of all the required amendments right away, however, that multiple rounds of genetic engineering are required. This is quite cumbersome. In addition to this, multiple sessions of DNA-tinkering with CRISPR-Cas9 can bring about mutations that disrupt (important) features. The outcome of this might be, for example, that the metabolic rate of the cell is interrupted, causing issues with growth and division.

The benefit of a man-made chromosome, like the one currently developed by the Delft scientists, is that the addition of genes doesn’t interrupt the cell’s prevailing functions. Eline Postma, a Ph.D. scholar stated that they view their artificial chromosome as a prospective means. It is a novel method to modularly and safely add functional genes to baker’s yeast-similar to arranging lego blocks.

The synthetic chromosome developed by the scientists isn’t directly presented inside the cell as a long string of DNA because it is hard to produce such a big chunk of DNA in vitro. Rather, the scientists made creative application of the yeast’s natural DNA repair mechanism. They introduced small chunks of genetic product inside the yeast cell such that both the ends of the strands are identical. Yeast cells acknowledge these the same ends and then link them together in a proposal to ‘fix’ them. Thus, the yeast cell constructs a big chromosome from loads of different pieces.

The scientists have checked their invention thoroughly. They duplicated the genes accountable for the most fundamental function of the yeast cell that is the reaction of alcohol production from sugar, to the artificial chromosome. Later, they repressed the innate genes with CRISPR-Cas9 technology. The yeast cells continued to maintain their sugar to alcohol converting ability. Postma mentioned that even though they did observe that the modified yeast cells didn’t multiply rapidly compared to the natural ones, they are still exploring the reason for this occurrence.

The following logical approach is to incorporate every type of new functionalities into the synthetic chromosome and convert the baker’s years into the smallest live manufacturing units. TU Delft scientists have already performed the initial process for this as well. They integrated a metabolic pathway for a therapeutic pigment, isolated from a plant to the artificial chromosome. And of course: the yeast cells began to generate the product, although in a moderate amount.

The opportunities for future studies are practically limitless. There are still several new processes to be found within nature. And, thanks to the expedition of scientific breakthroughs, yeast cells can be tailored to maintain pathways from bacteria, plants, or any other living being. Daran-Lapujade reported that in theory, they can continuously generate several products that are now made chemically by employing years. With regard to biotechnology, we are absolutely living in a marvelous period.