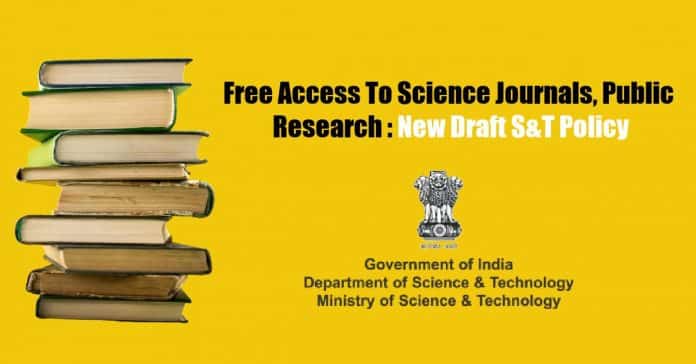 In a zealous trial to make scientific data and knowledge accessible to all, the management has put forth an Open Science Policy which assures that all publicly-financed research information and results are made open and free of charge to the public.

More importantly, the government has offered to purchase maximum subscriptions for all significant scientific journals worldwide, and present everyone open access to this information.

The plans have been included in the Science, Technology & Innovation (STI) Policy draft that was published on January 1st, 2021, for inviting suggestions and feedback from the people.

For individual scientists and the research community, the One Nation, One Subscription strategy for scientific publications is a big move that can be a turning point in their career. The world’s topmost publications in life sciences are exorbitant and occasionally it charges many tens of dollars for access. Even first-class organizations have to be choosy in subscribing to these publications.

Officials stated that the plan intended to acquire access to around 3,000 to 4,000 high-impact scientific papers, and the management could wind up investing approximately ₹2,000 crores-₹3,000 crores annually for the bulk subscriptions.

Akhilesh Gupta, team head for the STI policy drafting claimed that this action has not been attempted in any nation yet, however, in their viewpoint, this is a life-altering move for free scientific knowledge to the public. Publicly-financed research activities are performed with taxpayers’ cash. Further, the taxpayer does not have to pay for getting access to the data or results produced from this research.

As part of a novel Open Science Framework, One Nation, One Subscription is put forth to assure free scientific data to all. For this purpose, the Ministry of Science & Technology, which has composed the new policy, has offered to establish an STI Observatory that will function as the core reservoir for all forms of data produced from India’s scientific research activities.

FAIR or Fair, Accessible, Interoperable & Reusable conditions were used to govern the availability of all publicly-financed research information and data retrieved from the Observatory to the public. In circumstances where some data can not be provided to all because of intellectual property rights, national security, or privacy, redacted or suitably anonymized information will be provided. Also, even if a few pieces of information can’t be accessible to the public because of either these or any other reasons, genuine scientists would certainly have access.

The draft STI policy additionally suggests proactive measures to ameliorate the standard of Indian journals, as well as concentrated efforts to avoid the release of fake journals. Moreover, collections of all publicly-financed establishments are suggested to be made readily available to the people and have only rational security measures.

The Ministry of Science & Technology is anticipating that the final draft will be sanctioned by the Indian government by the first half of 2021. The mentioned policy goal, which will change the 2013 STI policy, is to accomplish technological self-dependence and set India amongst the world’s top 3 scientific powerhouses in the coming years. It hopes that private and government expenditure for research and development would increase twice every 5 years.

The STI policy’s fundamental element is the highlight of encouraging the objectives of Atmanirbhar Bharat by transforming into a science and technology self-reliant India. It suggests adopting a two-way methodology, indigenous development of technology, and modern technology indigenization, to accomplish this.

The STI policy states that the facilities will be established to enhance regional R&D potentials and decrease large-scale imports with particular divisions of domestic significance like electronic hardware for defense, cleantech, intelligent transport, railways, home appliances, and so on.

It claims that efforts like setting up a robust semiconductor ecosystem will boost India’s rank in the strategic divisions.

For the strategic divisions, the STI policy suggests the building of a Strategic Technology Board which will link all the strategic government divisions and supervise and advise technologies to be purchased or indigenously generated.