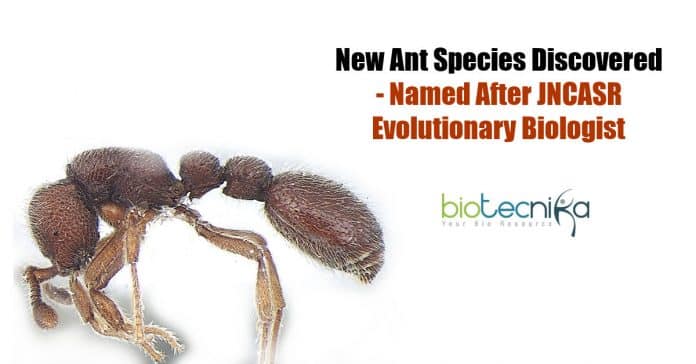 Indian scientists discover two new species of rare ant genus. The species of the ant genus Ooceraea found in Kerala and Tamil Nadu adds to the diversity of this rare genus. They have some differences in the number of antennal segments as compared to other known congeners. The antennal count has been determined to be one of the vital species-level diagnostic characters in the genus.

Furthermore, the 2 new species are well differentiated from each other by a combination of the following characters: head shape, the presence of ommatidia, propodeal lobes, the petiolar node in lateral view, subpetiolar process, pilosity, and sculpturation.

One of them was found in the Periyar Tiger Reserve of Kerala and named Ooceraea joshii, in honor of Professor Amitabh Joshi, a renowned evolutionary biologist from Jawaharlal Nehru Centre for Advanced Scientific Research (JNCASR).

Novel species are commonly named after some distinguishing characteristic or place; however, they are named after researchers as a way of honoring their research contributions to biology, specifically in the fields of evolutionary and organismal biology, ecology, or systematics.

The two new species, the first ones that have ten-segmented antennae among this rare genus, was discovered by a group of scientists led by Professor Himender Bharti of Punjabi University, Patiala. The discovery has been published in the journal ZeeKeys.

Out of the 14 species, 6 of these are reported from the Australian and Oceanian regions, 5 from the Oriental region, and 2 species from the Palearctic region.

The novel ant species with 10 segmented antennae discovered develop an old-world lineage that contains a species becoming the only model organism amongst the ant subfamily.