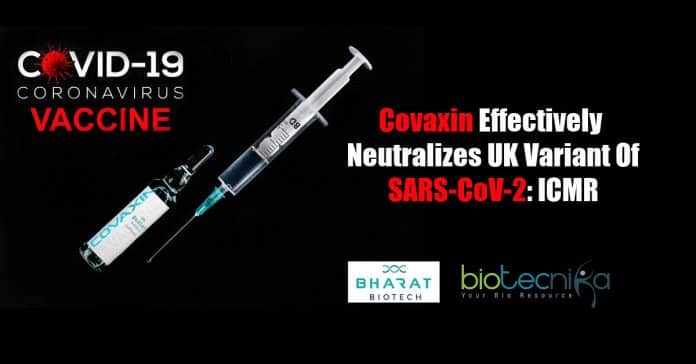 India’s COVID-19 vaccine – Covvaxin, effectively works against the new variant of SARS-CoV-2 recently found in the UK. According to a pre-print and non-peer-reviewed paper released on 26 January in biorxiv by the scientists at ICMR’s National Institute of Virology and Bharat Biotech, antibodies produced by Covaxin has the capability to neutralize the mutant UK strain of coronavirus in the lab settings.

One of the primary concerns regarding the UK strain is that the vaccine may not work effectively due to the mutations on the virus’ surface.

The paper claims that a similar neutralization activity of the immunized people’s sera showed effectiveness against the UK-variant and the heterologous strain, eliminating the ambiguity of possible neutralization escape.

Covaxin was under debate while it was given EUA eventhough it had not published any efficiency or phase III results.

Balram Bhargava, Director General, ICMR, defended the authorization in early January 2021, claiming Covaxin was more apt to protect against the UK strain. However, there was no openly published data to validate the claim at the moment.

The UK strain has 17 mutations, 8 of which are present in the spike protein.

study states that as most of the vaccine candidates focused on either recombinant or particularly targeting the unique epitope of the original D614G ancestral spike sequence, they might not have the ability to produce a reliable immunity against the new variants.

However, Covaxin is made of a whole inactivated virus and is not based only on the spike protein. The study was performed in a lab, utilizing the sera of 26 test participants who had been immunized with Covaxin.

The antibodies of the immunized trial members were used against 3 SARS-CoV-2 strains for the analysis – hCoV19/India/2020770, which was used by the National Institute of Virology for the development of Covaxin, hCoV-19/ India/2020Q111, a local strain that has been circling in India, and the hCoV-19/ India/20203522, the mutant UK strain.

The paper states that the average proportion of 50% neutralization of serum was determined to be 0.8 compared to hCoV-19/ India/2020770 against mutant UK strain, and 0.9 while compared to India’s local strain.

The researchers concluded that it is not likely the UK variant will certainly dismay the possible advantages of the vaccine in concern.