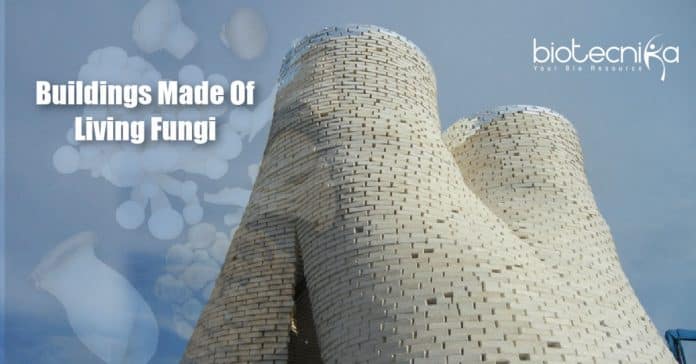 A bizarre edifice started forming right in front of the contemporary art centre, MoMA PS1, New York City, in the summer of 2014. It appeared as if someone had begun constructing an igloo and later got carried away, leaving huge towers of ice-white bricks. It was a beguiling sight, however, the real wonder was not how the building appeared like rather the truth that it had been grown.

The architectural design studio, The Living, New York designed and constructed Hy-Fi, the magnificent building. Mycelium, the mushroom-forming fungus and agricultural litter was packed together in a mould and allowed to form a solid mass-forming the bricks for the building.

This mushroom monument offered Phil Ayres, an architectural researcher from Centre for Information Technology & Architecture, Copenhagen, Denmark, an idea. Ayres stated that it was splendid. However, this study and many others similar to this one were employing fungus a key component in construction like bricks without essentially pondering about the scope of different kinds of buildings from fungi.

This is the reason behind the FUNGAR project led by Ayres and three colleagues to find out the possibility of different types of building with mushrooms.

Mushrooms may sound like a strange and unusual building component. Nonetheless, there is definitely a strong reason to substantially revamp construction methods. Construction and buildings contribute to 39% of human CO2 emissions – and a massive 21% of these emissions are due to the production of concrete and steel. Additionally, construction utilizes a huge quantity of natural resources. For instance, sand, a key component in concrete. It needs a unique sort, with exactly the proper roughness, to form concrete. Nowadays it is a moneymaking material and regulated in few parts around the world by sand mafias & stolen from islands by the boatload.

These kinds of problems will soar adversely in the coming future with the evergrowing population and rise in affluent communities across the world. We require numerous houses and according to the estimates, the number of buildings is shocking. Ayres claimed that it is similar to constructing a Manhattan each month for the coming forty years, quoting Bill Gates.

Can fungi really do the job? Unequivocally, states Prof. Han Wosten, mycologist, Utrecht University, Netherlands. Fungi don’t consume carbon dioxide like plants. They have to digest food and hence release CO2 similar to animals. But, the organic litters like straw or low-value farm wastes that fungi consume would be broken down to carbon dioxide anyway by burning or composting. Additionally, fungi bricks indelibly fix few of that litter within which is stored as a reservoir of carbon. All these attributes make fungi edifice an eco-friendly option-and obviously far better than employing bricks, steel and concrete.

The FUNGAR project commenced by the end of 2019 and until now Prof. Wosten has been exploring the method for making building materials. The team have been blending mycelium, the source of fungi, with farm wastes like straw at Prof. Wosten’s Lab, Utrecht. Later the team enables the fungi to develop for around 2 weeks, till the fungus has occupied the straw. This holds the straw strongly, generating a whitish foam-type material. Afterwards, they kill the organism by treating with heat. They can even modify it, for instance, by squashing or applying coatings. Prof. Wosten reported that if the end product is pressed, a hardboard kind of material can be obtained. Building composites of varying kinds with different mechanical properties can be prepared by altering post-processing, growth conditions, farm waste and fungi types.

Ayres mentioned that it is too soon to predict that houses will be built completely out of fungus. However, a few parts of the houses can be done so. Mogu, an establishment centred near Miln, Italy, already makes and markets sound-proof velvet-textured floor and wall tiles made from mycelium foam. Antoni Gandia, chief technology officer of the firm is also affiliated with the FUNGAR project. He asserted that Mogu is also producing mycelium-based building composites for replacing insulation materials.

Ayres is anticipating that the pioneering FUNGAR project will transcend just by utilizing fungi-based materials as components in prevailing building designs. He wishes to ponder on what completely unique building types can be built from fungi. The first thing in his mind is making with live fungus.

There are two main advantages to this. Initially, live fungus might act as a self-healing material, merely re-growing if it ends up being ruined. Second, mycelium networks can process information. Electric signals run through them as well as transform in time in a way virtually comparable to a brain. Prof. Andrew Adamatzky, the University of the West of England, Bristol, UK who is also managing the FUNGAR project with AYres proclaimed that they have found that fungal materials react to tactile illumination and simulation by modifying their electrical activity patterns.

The notion is that maybe the actual framework of a mushroom edifice might recognize and react to its surrounding independently. It may for example recognize when carbon dioxide levels from the mycelium are increasing and unlatch the doors to release the gas, based on a statement from Gandia.

A building made out of alive mycelium will be a huge challenge. This is mainly due to the fact that as it grows more, it consumes and decomposes more substrate materials like straws or any other waste materials. As the straw provides structural integrity to the materials, enabling the fungi to grow more isn’t favourable. There can be alternative methods for this. Absence of water makes fungi format: live but not growing. Therefore, one of Ayyres’s notion is to build walls with 2 sheats of dead fungus packed with a sheet of living fungus. This can prevent water from reaching the inner layer, sustaining alive fungus in a dormant state.

Among the handful of other individuals who have studied fungal building methods is Jonathan Dessi Olive from Kansas State University, US. He reported that functioning with live fungi is a really intriguing novel idea as it provides the chance of the building capable of healing itself. Whereas for him the true beauty of what he refers as myco-materials is that they provide us with a means of remodelling how we think on the persistence of architecture.

He also questioned what if a few-not all-of our edifices were intended to persist for a few years and could subsequently be recycled into energy, food or shelter?

The next principal objective of the FUNGAR project is to construct a freestanding and small building. They intend to complete this goal by a year and later spend time checking it as it grows. Ayres claimed that it is vital to be able to check the living building and observe its modifications. It is not yet clear as to what kind of structure can be finally constructed from fungi, however, they will perhaps start with a small one. Prof. Wosten joked that he won’t be crossing a fungi-based bridge.

You might be questioning about the fate of Hy-Fi, that igloo-like building in New York. The solution highlights the most attractive feature of mycelium buildings. No slow decay or wrecking balls for Hy-Fi. It was taken down and composted.

Buildings Made From Living Fungus