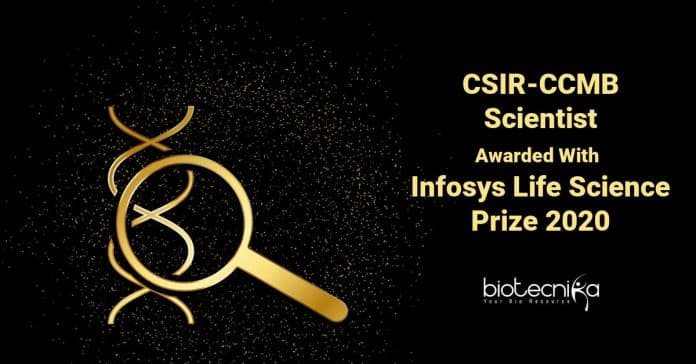 CSIR-CCMB scientist Dr. Rajan Shankaranarayanan has been awarded the Infosys Prize 2020 in the category of life sciences. The award announced on the night of 2nd December 2020 recognizes the structural biologist’s contribution to biological sciences through his work on protein synthesis by error-free translation of gene code.

Dr.Shankaranarayan reminisced that people didn’t believe in the existence of his question when he came up with it 15 years ago. He acknowledged with gratitude the support of his colleagues and family in his long journey.

Dr.Shankaranarayan’s work that won him the Infosys prize in life sciences, focuses on the fundamental cellular process that prevents the incorporation of D-amino acids into the synthesized protein. This, in turn, averts the occurrence of deleterious effects. The discovery has potential applications in formulating drugs like immunosuppressants and antibiotics.

Two times in a row for CCMB scientists

The award is annually given in six categories to the best researchers in the respective fields. The categories include Physical sciences, Mathematical Sciences, Social sciences, Humanities, Engineering and computer sciences, and life sciences. The Infosys prize in life sciences has been awarded to the most

eminent scientists of the country year after year

The director of CCMB, Dr.Rakesh Mishra, praised Dr. Shankaranarayanan as an exceptionally rigorous researcher who is greatly celebrated among his fellow scientists nationally and internationally. Everyone in the institute is elated with him bagging the award.

Dr. Rajan Shankaranarayanan is the third scientist from CCMB to win the prestigious Infosys Prize in life sciences. The researchers of CCMB have, in fact, won the prize 2 times in a row. In 2019, the award was bagged by Dr.Manjula Reddy. In 2011, Dr.Imran Siddiqui had won the prize. The award comprises a citation, gold medal, and prize money of 1 lakh US dollars.