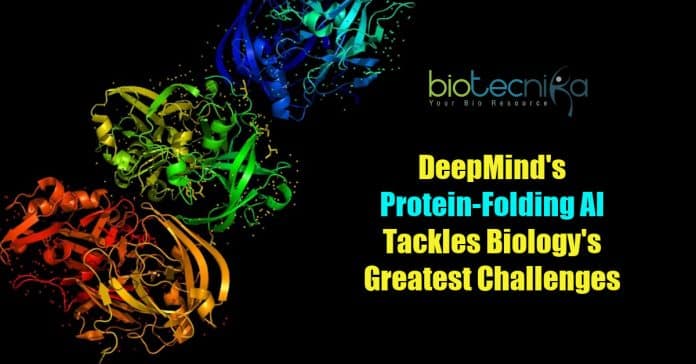 Articial intelligence is helping to predict possible forms of a complex protein.

Proteins are one of the most crucial things to comprehend if you need insight into life. There are 20 types of amino acids, which are the worker ants of biology. Proteins play various roles in our body – in the form of enzymes, they catalyze nearly all of the chemical reactions that maintain body functioning, muscle cells – actin, and myosin allow those bodies to move around, Keratin makes up the skin and hair, Hemoglobin carries oxygen, and Insulin controls the metabolism. Most notably, it’s a protein, SARS-CoV-2 spike protein, that enables SARS-CoV-2 to attack human cells.

Now, it’s very simple to analyze a protein’s amino-acid composition. Devices to carry out such analysis has existed for years. However, this is just half the fight in the quest to
comprehend how proteins function. How amino acid chain folds up after its production – into its complex forms, decides what a protein does, and how it does it.

Right now, molecular biologists can probe proteins’ shapes analytically, using methods such as X-ray crystallography, but doing so is a fiddly and time taking process. Presently, things may get much simpler.

Scientists from DeepMind, an articial-intelligence (AI) lab owned by Alphabet, Google’s parent company, provided outcomes of their study revealing that they have succeeded in making tremendous advancement on one of biology’s great challenges how to predict protein’s shape from a list of its amino-acid using a computer. DeepMind’s protein-folding AI tackles one of biology’s greatest challenges.

Replacing months of trials with some hours of computing time might open doors for understanding the inner workings of cells. It could hasten the drug development process. It might especially suggest therapies for diseases such as Alzheimer’s, in which misshapen proteins are considered to serve a function.

Previously, the machine-learning approaches that DeepMind’s group utilized to assault the protein-folding issue have been famously known for powering things like face-recognition cameras and voice assistants and beating humans at complicated games like Go. However, Demis Hassabis, DeepMind’s head, founded what was then an independent company in the expectation that they might additionally be utilized to expedite the advancement of science. This outcome describes how that may function in practice.

The concept of utilizing computers to predict proteins’ forms is 50 years old.
Ewan Birney, Deputy Director, European Molecular Biology Lab, advancement has been real, yet slow. As well as it has actually been marked by a history of incorrect turns and unanticipated affirmations of triumph. These days, it currently marks its progression by how well algorithms function in Critical Assessment of Protein Structure Prediction (CASP). This is a biennial trial that began in 1994 and is amusingly referred to as the “Olympics of protein folding.” In it, algorithms go through blind tests of their capability to anticipate the protein’s shapes of known structure.

At this, its next effort, DeepMind has aced CASP. It’s the first attempt, dubbed
AlphaFold made waves 2 years back by executing better than any type of existing program. The present version, AlphaFold 2, has actually extended that lead still further. One step of achievement within CASP is the global-distance test. This assigns algorithms a rating between 0-100 by analyzing the anticipated areas of atoms in a molecule’s framework with their position in reality. The average score of AlphaFold 2 is 92.4 – a precision that CASP’s
founder, John Moult, states are approximately similar to what can be achieved by methods such as X-ray crystallography.

Till now, DeepMind was most probably best known for its achievement in teaching computer systems to play games, the fiendish method that had been a symbol of AI scientists since the field commenced. In 2016 a DeepMind program known as AlphaGo beat Lee Sedol, one of the world’s best gamers. Dr. Hassabis stated that there are more resemblances in between protein-folding and the game than might, initially, show up.

One is the impossibility of striking the trouble with the computational brute.
force. There are believed to be around 10 lawful positions in Go, a number far going beyond the number of atoms in the universe, and also which is, therefore
, way ahead of the reach of computers. One assessment is that there may be as many as 10 various shapes in which a moderately intricate protein can find itself. Add to this the point that a protein shapes itself in the preferred shape due to the equilibrium of different atomic-scale forces acting between and within its amino-acid building blocks, and with any other molecules, especially of those of water, bordering them, and also it becomes clear that the only method to carry out the trick of forecasting protein folding is to search for shortcuts.

The advancement that computers have made on this challenge throughout the years shows that several of these are present. However, it likewise ends up that even inexpert humans can learn such skills by playing around. Dr. Hassabis remembers being hit by the capability of human beginners to accomplish great outcomes with “FoldIt,” a science-oriented video game released in 2008 that welcomes its gamers to attempt folding proteins themselves, and which has actually produced a clutch of papers and discoveries.

Getting gamers of “FoldIt” to describe precisely what they are up to, however, is.
complicated. As opposed to describing step by step what they are believing, players of both games tend to speak in vaguer terms of “intuition” and “what feels correct.” This is where artificial intelligence comes in. By feeding computer sufficient instances, they have the ability to learn and apply faster ways and also rules-of-thumb of the sort that humans also do, yet battle to verbalize. Seldom, the machines come up with understandings that shock human professionals. As Dr. Moult notes, generally, the information of the backbone [the molecular scaffolding that joins with amino acids together] is amazing. AlphaGo has actually determined that if one doesn’t get the information right, then they will not get the big things right.

As an AI accomplishment, AlphaFold 2 is not really thus far ahead of the field as
AlphaGo. Lots of other study teams have used AI to the protein-structure challenges and have noticed reassuring progression. Specifically, what DeepMind has actually done to seize the lead stays unclear, though the company has promised a technical paper that will certainly investigate the details. In the meantime, John Jumper, leader of the project, mentions that artificial intelligence is a box that has a range of tools, as well as claims that they have currently deserted the system they utilized to develop the original AlphaFold in 2018 after it became clear that it had touched the boundaries of its capacity.

Dr. Jumper stated that the present version has even more space to expand. He and his group think there is space to expand the software’s precision yet further. There are, for
now, things that continue to be past its reach, like how exactly structures developed from numerous proteins joined together.

Ken Dill, a biologist, Stony Brook University, New York state, author of a recent summary of the area, mentions what AlphaFold 2, its competitors, and indeed, methods such as X-ray crystallography discover are static frameworks.

Nevertheless – and relying on exactly how DeepMind chooses to accredit the technology – a capability to produce protein structures regularly in this way could have a huge impact on the field. About 180m amino-acid sequences are known, yet structures of only around 170,000 have been identified. Dr. Moult believes that increasing this number might assist in screening drug candidates to see which are most likely to bind well to a specific protein. It could be utilized to reanalyze already available medicines to comprehend what else they may do. It might improve synthetic biology by accelerating the development of human-designed proteins to catalyze chemical reactions.

There have already been encouraging progress. AlphaFold 2 was, for instance, capable of predicting the frameworks of numerous proteins utilized by the SARS-CoV-2 coronavirus, even the spike protein. Dr. Birney stated that they are definitely going to spend time kicking the tires; however, he almost fell off his chair when he first saw these results.