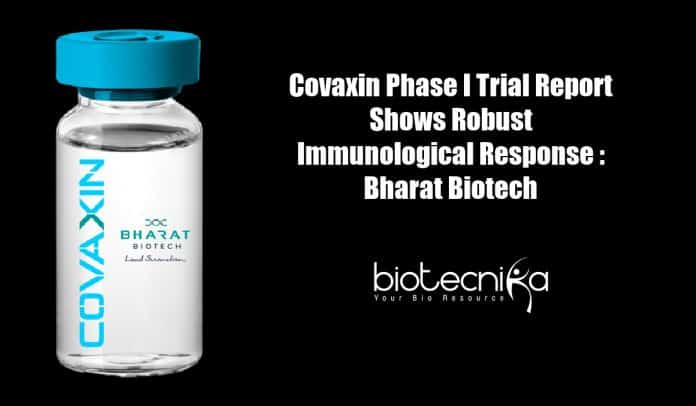 The early results of Phase I studies of Covaxin, the COVID-19 vaccine, indigenously produced by Bharat Biotech jointly with ICMR, proved that it was effective in tolerating and with no adverse or serious effects in all dose types.

The immunization shots triggered strong neutralizing and binding antibody responses which were similar to those found in convalescent serum retrieved from COVID-19 recovered individuals, based on the research reported in medRxiv, a preprint server.

A preprint is referred to as a type of scientific writing which is published on a public platform before formal peer reviews.

The findings demonstrated a severe negative effect, which was proved to be not connected to the above vaccination.

To assess the immunogenicity and safety of Covaxin (BBV152), Phase I clinical trial was a randomized and double-blind controlled study.

The report further refer that the vaccine, BBV152 is stored with a temperature range of 2-8℃, which is appropriate for all national immunization program freezer facilities and detailed experiments regarding efficiency are afoot

Based on “A Phase I: Immunogenicity and Safety of an Inactivated SARS-CoV-2 Vaccine BBV152”, following the initial immunization shots, systemic and local adverse side effects were primarily mild or moderate in intensity and settled quickly, devoid of any prescribed medicines.

A comparable style was found after the administration of the 2nd shot. The most occurred local adverse effect was the pain at the site of injection.
According to the research, a severe adverse effect was stated. The participant was immunized on July 30. 5 days after, the individual reported signs and symptoms of COVID-19 and also was found to be SARS-CoV-2 positive.

To guarantee generalisability, the test was performed on volunteers from varied geographical areas and also socioeconomic conditions, signing up 375 participants across 11 health centers.

The findings also illustrated that in spite of the enrolment time while the nation was under lockdown, which resulted in numerous functional defects, the total participation retention rate was 97%.

The document added that the considerably large size of the sample enabled the extraction of relevant findings for safety and immunogenicity.

BBV152 caused strong neutralizing and binding antibody responses that were comparable to those triggered by other weakened vaccine contenders for SARS-CoV2, it claimed.
Intramuscular injections were administered with two dosages and 0.5mL/dose of the vaccine, on days 0 and 14. Further, the follow-up visits were planned for days 7, 28, 42, 104, and 194.