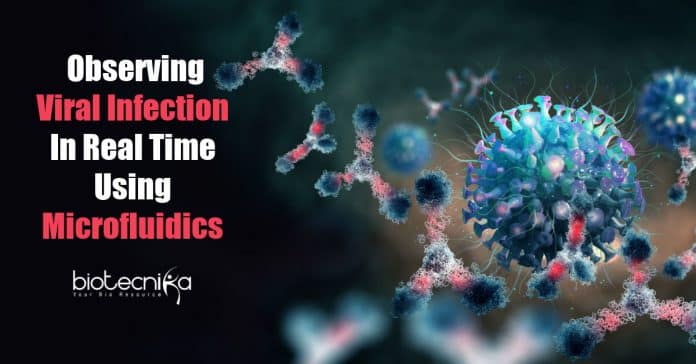 Scientists have discovered a novel technique to observe viral infection in real-time – the method utilizes microfluidics – the submillimeter control of fluids within a specific, geometric framework. Chemical engineers from Michigan Technological University have been capable of controlling viruses in a microfluidic device utilizing electric fields – which is primarily tricked-out of the microscope slide. The study released in the journal Langmuir looks at variations in the cell membrane and offers scientists a more clear concept of how antivirals function in a cell to stop the viral spread.

Viruses carry around an external covering of proteins called the capsid. The proteins function as a lockpick, connecting to and pulling open a cell’s membrane. The virus, after that, captures the cell’s internal functioning, requiring it to mass-produce the virus’s genetic material and build several viruses. The new viruses explode through the cell wall in a similar way how popcorn gets pushed away from the lid of an overfilled pot. And the cycle proceeds with even more virus lockpicks on the loose.

Adrienne Minerick, a professor of chemical engineering, Dean of the College of Computing, and co-author of the study, stated that when

you check out standard methods – fluorescent labeling for various stages, imaging, examining viability – the point is to understand when the membrane is jeopardized. The obstacle is that these methods are indirect measures. Their devices scan the charge distribution, so it is profoundly aimed at what is occurring between the virus surface and cell membrane. They uncovered with better resolution when the virus, in fact, enters the cell.

Observing the viral infection cycle and monitoring its phases is vital for developing novel antiviral medications and obtaining a greater knowledge of how a virus spreads. Dielectrophoresis occurs when polarizable cells get shoved around in a non-uniform electrical field. The motion of these cells comes in handy for detecting diseases, blood typing, examining cancer, and numerous other biomedical applications. It is very vital to keep in mind when applied to research viral infection that viruses have a surface charge, so, dielectrophoresis exposes the electrical conversation between the virus capsid and the proteins of a cell membrane inside the restricted space in a microfluidic device.

Sanaz Habibi, who led the study, a doctoral student in chemical engineering at Michigan Technological University, stated that they utilized microfluidic tools and researched the interaction between the virus and cell in relation to time. They revealed that they might observe time-dependent virus-cell interactions in the electrical field.

While observing a viral infection in real-time, the cells in the microfluidic tool dance around, moving right into unique patterns with a dielectric music sign. There has to be the appropriate ratio of the virus to cells to watch infection occur – as well as it doesn’t occur swiftly. Sanaz’s trial runs in 10-hour shifts, following the opening scenes of viral attachment, a lengthy interlude of intrusion, and ultimately the fatal end when the new viruses outburst, damaging the cell in the process.

Prior to they burst out, cell membranes form structures referred to as blebs, which change the electric signal estimated in the microfluidic tool. That suggests that the dielectrophoresis determinations grant high-resolution perception of the electric shifts occurring at the surface of the cell via the entire cycle.

Presently viral infections are on top of mind. However, not all viruses are identical. The research group concentrated on a known and highly researched virus – the porcine parvovirus. However, microfluidic tools that utilize dielectrophoresis could be used for on-site, fast testing for viral diseases like COVID-19.

However, then the group wanted to try out, so they added the osmolyte glycine, a vital intervention their colleague’s study in vaccine development and viral surface chemistry.

Habibi stated that using their system, they could show the time-dependent behavior of the virus and cell membrane. Then they added the osmolyte, which can serve as an antiviral compound. They believed it would terminate the interaction. Rather, it seemed like the interaction extended to occur at first; however, then the new viruses could not get out of the cell.

This is since glycine likely hinders the new capsid formation for the replicated viruses inside the cell itself. The dielectric estimations display a shift between an infected cycle where capsid development occurs and an infected cell where capsid development is hindered by glycine. This variation in electrical charge symbolizes that glycine inhibits the new viruses from developing capsids and obstructs the would-be viral lockpickers from hitting their targets.

Habibi stated that while working with such tiny particles and organisms, and you can see this process occurring in real-time, it is gratifying to trace those modifications.

This unique aspect of the interactions between virus capsids and cell membranes can fasten examining and identifying viruses, without costly and time-consuming imaging technology. In the future, there can be a point-of-care with small tools to diagnose viral infections, and we can expect medical laboratories will be equipped with other microfluidic tools which can instantly analyze and show the best efficient antiviral medicines.