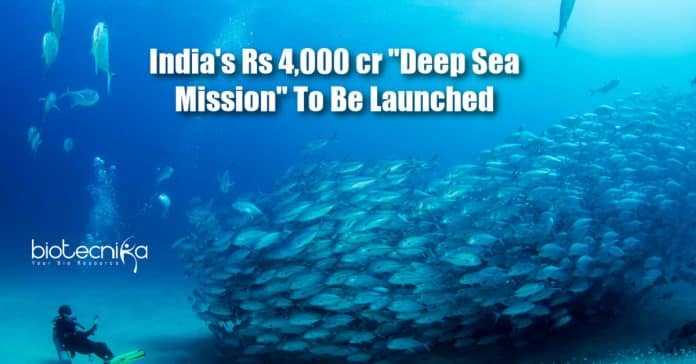 Ministry of Earth Sciences has declared a forthcoming mission in India, a “Deep Ocean Mission”, proposing exploration of energy resources, minerals, and marine heterogeneity of the deep sea, a mysterious world to scientists.

M Rajeevan, the ministry’s secretary mentioned that further consents are acquired for this “prospective and revolutionary” quest and is probably going to commence in the coming 3-4 months.

Another senior official of MoES stated that the expected cost for this mission is more than Rs4,000 crore, which will enhance the actions taken to investigate India’s massive Continental Shelf and Exclusive Economic Zone.

The multi-sectoral task will be maneuvered by the MoES and also other government divisions like the Council for Scientific and Industrial Research (CSIR), Department of Biotechnology,  Defence Research and Development Organisation, and Indian Space Research Organisation (ISRO), Rajeevan included.

DRDO and ISRO will be responsible for developing a few technologies related to this mission. MoES officials said that the pivot facet of the mission will be the scheme, construction, and exposition of human submersibles. The second feature is searching for the chances of deep-sea mining and establishing essential technologies, the official included.

According to the officials, this mission is strategically important as it will boost India’s involvement in the Indian Ocean where other countries like China, Germany, and Korea are operating.

The previous week, China live-streamed a video of its new man-powered submersible stationed at the foot of the Mariana Trench, which belonged to its quest into the deepest ocean world of Earth.

India has been reserved almost 1.5 lakh sq. km of the region in the central part of the Indian Sea for research.

India joined with International Seabed Authority (ISA) for a 15-year agreement for the expedition of Poly-Metallic Sulphides (PMS) in the Indian Ocean during September 2016.

The ISA is a group established under the Convention on Law of the Sea, where India is also a part.

The 15-year agreement formalized India’s unique rights for the expedition of PMS in the designated plots in the Indian Ocean.

Components of PMS include platinum, gold, silver, copper, iron in different quantities. These are the condensed forms of lava from the deepest section of the oceanic crust, released through mineralized vents.

PMS in the Sea Ridges has drawn global interest for their long term trade and policy interests.

The objective is to be ready when guidelines are formalized in this section. The deep-sea frontier is yet to be checked out. We have been operating by a gradual means yet the drive is to accomplish work on mission mode, the authorities included. The mission will also entail the acquisition of more developed deep-sea ships for expeditions. The available vessel Sagar Kanya is almost three-and-half decades old.