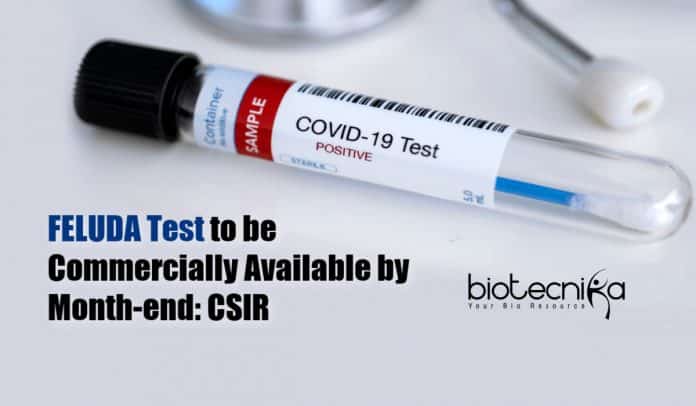 Feluda Test to be Available by the End of this Month

A COVID-19 test developed by the Council of Scientific and Industrial Research and to be commercialized by Tata Sons, the Feluda test for COVID-19 will be available from this month in laboratories. The Director-General, CSIR, Dr. Shekhar C. Mande, said that all the necessary formalities are completed and the test should be made available commercially anytime shortly this month.

Compared to the gold-standard test RT-PCR, the FELUDA (FNCAS9 Editor-Limited Uniform Detection Assay) test promises to be quicker and does not require the expensive machine, though the test still requires a nasal swab to be collected and sent to a lab.

Thermocycler, a portable machine which is smaller sized, less expensive costing around ₹25,000 is utilized here and to confirm the presence of the virus, it takes around 45 minutes to an hour once the viral RNA is extracted. The Feluda test is also unlike antigen tests. It is much more precise in detecting the virus as it uses a CRISPR-cas9 based system, the discovery of which was awarded for the Nobel Prize for chemistry this year (CRISPR-cas9 genome-editing tool). The cas9 enzyme in the FELUDA can be employed to

hone in on a particular DNA sequence (in this case unique to the coronavirus) and thus, inferring the presence of the virus.

According to current estimates, the FELUDA test is much cheaper than the RT-PCR test which costs around ₹1,200-₹1,600, whereas this test is reported to cost around ₹500 per test. The duration of how soon laboratories are able to extract the viral RNA is a major factor determining how rapidly labs are able to process tests.

The FELUDA test has the paper-based test only as one part of a series of steps to confirm the virus presence, though a paper-based test could seem similar to the home-based pregnancy test that does not require an intervening lab, and FELUDA is still not at that stage. In the test, if a virus is present, then the paper strip dipped into a specially created chemical soup returns two blue lines, and if the virus is not present and the sample is negative, then it shows a single line. According to the scientists who developed this test from CSIR-IGIB, this one step on the paper takes just two minutes, however, many other steps involved can take longer. Yet, the FELUDA approach is more scalable in a wide range of settings given the use of less complex and simple machines and the standardized processes after the RNA is extracted.

As there is no standardized process to extract RNA, the current government regulations don’t permit the use of a saliva sample in a FELUDA-style system, which can work in theory, as it can cause many false-negative results. The researchers further plan of making the test a purely home-based test in the future.