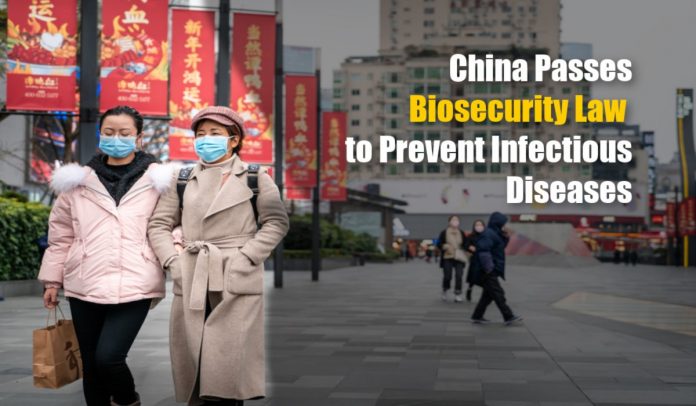 China Passes Biosecurity Law For The Prevention of Infectious Diseases

In May, China had announced that by year-end, it plans on fast-tracking the passing of biosecurity law, following the global coronavirus outbreak. Now, finally, the National People’s Congress Standing Committee voted for adopting the biosecurity law that is set to put into effect on April 15, 2021, after nearly eliminating the domestic spreading of the deadly SARS-CoV-2 virus causing the Covid-19 infection.

After the case of coronavirus in humans was detected first in Wuhan, the Chinese city in the Hunan province in the month of December 2019, following the outbreak of coronavirus globally, China was set to focus on fast-tracking the passing of the biosecurity law by year-end, according to the country’s announcement in May.

According to Xinhua, the law voted by the National People’s Congress Standing Committee would come into effect on April 15, 2021, which would establish systems for biosecurity risk control and prevention, including information sharing, risk investigation and assessment, and risk monitoring and early warning.

Xinhua reported that the

law would also have provisions for preventing and responding to specific biosecurity risks, such as an epidemic, major emerging infectious diseases, sudden outbreaks, and biotechnology application, development, and research.

By employing aggressive measures to curb the spreading of the coronavirus, China has managed to nearly eliminate domestic transmissions of the coronavirus. However, the country’s run of around 2 months without a local case being reported was ended when in the easter coastal city of Qingdao, new infections were detected last week.

The total number of Covid-19 confirmed cases in the mainland was 85,672 after 13 new coronavirus cases were reported in the mainland for Oct. 17, according to the reports by China’s health commission.