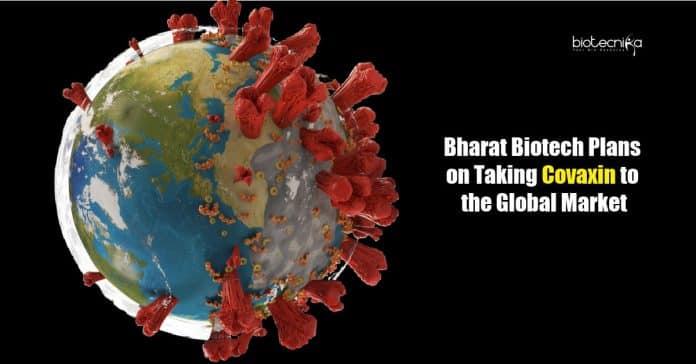 Bharat Biotech plans on taking Covaxin to the global market.

An Executive of Bharat Biotech, an Indian company, recently told that more than 10 international countries are showing an interest in the company’s potential COVID-19 vaccine. Presently the company is in discussion with the interested partners. Bharat Biotech is developing the vaccine in collaboration with the Indian Council of Medical Research (ICMR).

This week the company received initial approval for conducting the late-stage trials for the candidate vaccine, Covaxin, from the government of India.

Sai Prasad, Executive Director, Bharat Biotech, said that the vaccine’s first two trials were carried out on about 1,000 people, and the vaccine was found to be safe for use without any major adverse events. 90% of the volunteers developed antibodies for the novel virus after the first two trials.

to conduct clinical trials and for the introduction of the vaccine, while in some countries, the company is talking about manufacturing the vaccine locally.

The names of the interested countries were not mentioned by the Executive Director, but he dropped a hint that the countries are located in Asia, Central Asia, South America, and Eastern Europe.

Zydus Cadila, India, is in mid-stage trials of their vaccine candidate, while Serum Institute, Pune, India, is making potential vaccines from AstraZeneca, Codagenix Inc, and Novavax, and also developing the company’s own vaccine.
India ranks second-highest in the number of coronavirus reported cases, near about 78 lakhs, and 100,000 reported death cases.

Bharat Biotech plans on taking Covaxin to the global market.