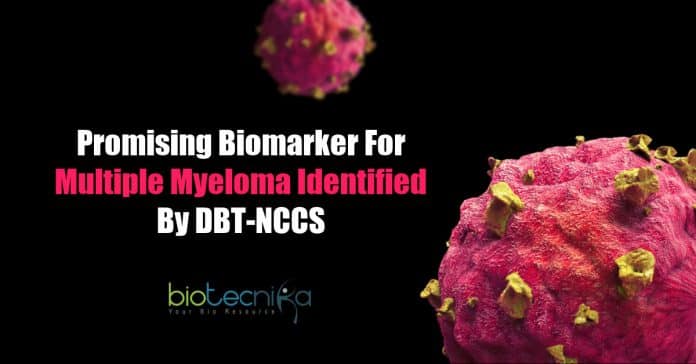 The second most prevalent blood cancer at the global level is multiple myeloma. Multiple myeloma is cancer that is associated with plasma cells, a type of white blood cell that makes antibodies. Plasma cells develop from immune cells in the blood, called B cells when the latter has been activated by the presence of harmful microbes.

Under normal conditions, antibodies produced by the plasma cells help the body to get rid of these pathogens, thus protecting it. However, when the plasma cells turn cancerous, they become deformed and overproduce antibodies that are nonfunctional. Diagnosis of this cancer at an early stage is of utmost significance as it is incurable in most cases.

Tumor markers are usually used to diagnose cancers and track the development of the disease and the effect of the treatment regimen. These markers are molecules, such as proteins and other substances, that are found in or on the tumors, or in other tissues and bodily fluids of cancer patients. These molecules are either present in or produced by the cancer cells themselves, or are produced by other cells in the body, in response to cancer.
Genomic markers like tumor gene mutations, tumor-specific gene expression patterns, and non-gene-associated changes in tumor DNA, are also being frequently used as tumor markers. Such markers contribute important information about cancer, such as how
aggressive it is, whether it could be treated with particular therapy, or whether it is
responding to the treatment.

In the case of multiple myeloma, however, there is a lack of suitable tumor markers. This
contributes to its poor prognosis. There is a requirement to look for and identify new markers and targets for the diagnosis and treatment of this cancer.

The National Centre for Cell Science (DBT-NCCS) in Pune, an autonomous institute of the Department of Biotechnology (DBT), has been involved in research aimed at identifying such molecular markers. Scientists here have identified some promising proteins that could potentially serve as biomarkers for multiple myeloma using cutting-edge proteomics and bioinformatics tools.

From among these, they studied a specific protein called “MZB1” in greater detail, using a
cell culture called “RPMI-8226” grown in the laboratory, which serves as an experimental
model for multiple myeloma. They found that the MZB1 protein is associated with the progression of this cancer, and could therefore potentially be used as a biomarker and also as a therapeutic target for multiple myeloma in the future.

Yet, further studies would be required to validate these findings, and to move them closer towards application in the clinical management of multiple myeloma. The results of the study were published in the journal International Journal of Oncology. The study was carried out in association with the Army Hospital in New Delhi and the Armed Forces Medical College in Pune. They emphasize the significance of collaborations between scientists and clinicians in addressing health-related challenges meaningfully.