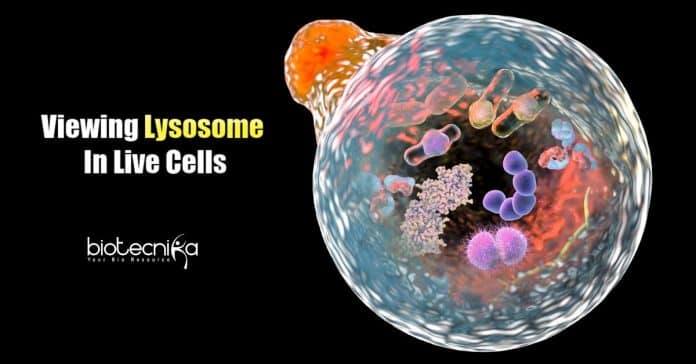 The basic unit of life, the Cell, is aided by many of its organelles to perform various functions. The lysosome is the tiniest yet important cellular organelle in the animal cell. Due to the tiny size of the organelle, 50-500 nanometer (nm), it is a challenging task to image and understands the functional modalities of lysozyme even with the available high-end imaging techniques. To address this issue, researchers from the Indian Institute of Technology, Mandi (IIT Mandi), have designed a gold nanocluster(nano-probe) for imaging lysosome.

The team used a super-resolution microscopic imaging technique to take an image of the actual size of the lysosomes. Finding an efficient fluorescent probe is a major challenge with super-resolution microscopic imaging. With the fluorescent probe, the organelle should be able to image the organelle to its subnanometer size without causing damage to the cellular structure with any toxic effect.

Because of the exciting photoluminescence properties, non-toxic nature, and easy clearance from the system, the gold nanoclusters have tremendous applications in the biomedical sciences. Despite its immense potential, gold nanocluster has never been explored for super-resolution microscopic imaging, says Dr. Chayan Nandi, Associate Professor, IIT Mandi. He

added that his team is first to report the applicability of the fluorescent probe for the microscopic technique that uses single-molecule based localization. The fluorescent probe could be used universally for high-end optical imaging because of its intrinsic fluorescent properties, extremely small size, and non-toxic nature, added Dr. Nandi.

For the imaging of lysosomes, the researchers have designed an efficient fluorescent nano-probe with a bovine serum albumin protein and conjugated it with red emissive gold nanoclusters. The diameter of the lysosome obtained by this process is 59nm. This diameter is equivalent to the diameter of the smallest lysosome in HeLa cells. HeLa is an immortal cervical cancer cell line and is instrumental in studying human diseases, like cancer.

The next aim of this study is to enable the nano-probe to be used for multimodal bioimaging techniques, thereby making the gold nanocluster a universal probe. The high electronic contrast nanocluster, along with its use in super-resolution optical microscopy, could be used for a scanning electron microscope as a probe and for transmission in a correlative manner. This will unveil a lot of unsolved problems in the biological functioning by studying a live cell, says Dr. Nandi.

A new Optical imaging technique is devised for the lysosome.