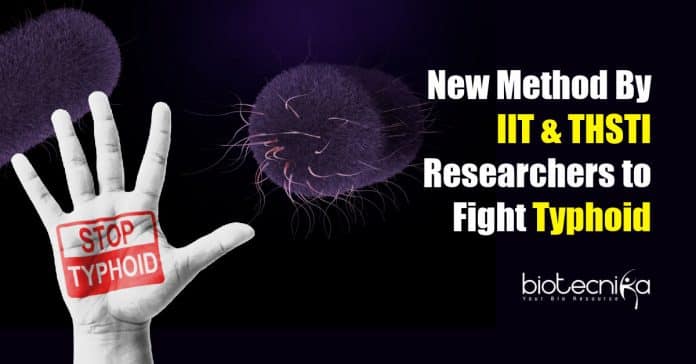 New method is developed by researchers to fight Typhoid.

Scientists have figured new promising ways to tackle the typhoid fever caused by Salmonella enterica. Scientists from the Indian Institute of Technology-Indore have found new ways to deal with the pathogenic fever causing bacteria.

This bacteria is highly contagious, responsible for many pandemics in the past. It spreads through contaminated food and water sources. As per a report by the Centers for Disease Control and Prevention (CDC), USA, a total of 22 million fresh cases of typhoid is reported every year throughout the world and is responsible for about 200,000 deaths per year. The disease is particularly concerning as the pathogen rapidly develops resistance to drugs. hence, researchers around the globe work on newer therapeutic approaches.

One approach to tackle the pathogen is to tweak the genetic makeup of the bacteria after an analysis of the genome of the bacteria. Although a genome is made of four bases- Adenine, Guanine, Thymine, and Cytosine, they display different characteristics based on their arrangement. Guanine rich genome regions are of particular interest due to the presence of regulatory G-quadruplexes. The G-quadruplexes are responsible for the regulation of biological processes like recombination, gene expression, and DNA- replication.

An advantage of the G-quadruplexes is that they can be of use in both the antibiotic-resistant and antibiotic susceptible strains of the bacteria. This is due to the conservative nature of the region throughout the genus. This therefore can be exploited to eradicate multi-drug resistant strain of the pathogen.

The researcher team from IIT-Indore in collaboration with members from the Translational Health Science and Technology Institute (DBT-THSTI), studied the Salmonella enterica bacterium genome and identified three regions to exploit it as a drug target.

Dr. Amit Kumar, team leader stated that the identification of the conserved region the contagious disease-causing bacteria Salmonella enterica is exciting. This region can be explored for the development of medicines to treat the disease. He further added that the team is on the identification of new efficient molecules with high affinity and selectivity for the targeted sites.

A new method is developed by researchers to fight Typhoid.