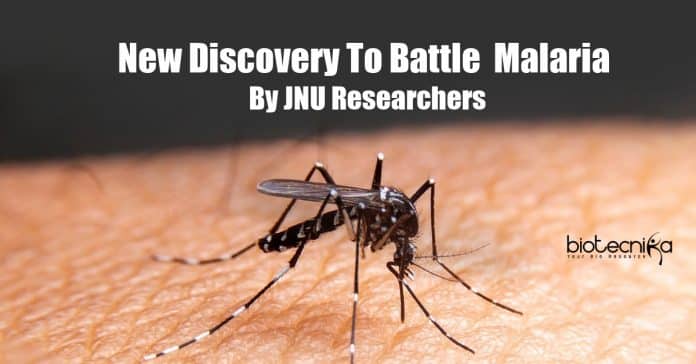 New discovery to battle against malaria

Malaria is India’s huge concern. WHO estimates that India observes almost 15 million cases of malaria with 19,500-20,000 fatalities reported annually. The current medications are rapidly losing their potential with increasing drug resistance. A novel anti-malarial peptide that could be utilized in combination with various other antimalarials for obstructing the Plasmodium falciparum parasite from infecting blood cells has been discovered by Professor Anand Ranganathan and his coworkers at Special Centre for Molecular Medicine, Jawaharlal Nehru University, teaming up with researchers from Shiv Nadar University, Noida.

The malaria spore enters the bloodstream when the malarial germ-carrying mosquito bites a human host, and first, it reaches the liver cells. These spores turn into malarial germs in the liver cells capable of initiating a new developmental cycle – sexual or asexual. These parasites enter into the blood to infect the RBCs of the host.

Once the parasite enters the RBCs, they begin to destroy oxygen-carrying hemoglobin as well as disfigure the cell surface so that the blood cells adhere to blood vessels instead of circulating smoothly. Meanwhile, the parasite multiplies inside the RBCs. The newly formed parasites burst open the blood cells and come out as soon as the multiplication is completed – to infect more cells. The whole process of infection of the RBCs, multiplication as well as the release of the new parasites into the blood cells is synchronized and occur at a regular interval.

This is the reason why malarial fever repeats every 48 hours when infected with Plasmodium falciparum. For the malarial parasite to cause infection, entry into the red blood cells is a crucial step. Restriction of the entry would lead to arresting the disease. To propel, and invade the host cell, the parasite uses molecular motor machinery called glidesome.  The two proteins that are part of this glideosome machinery that is essential for the mobility of parasite are Myosin A and myosin A Tail Interacting Protein (MTIP).

They produce the force called required by the parasite to actively attack host cells. The parasite will be immobilized and it will not be able to infect the red blood cells and cause malaria if they are made dysfunctional. Zill e anam, the lead researcher of the study said that the crucial myosin A tail-MTIP interaction of the Plasmodium falciparum motor complex is crucial for the locomotion. A novel technique to stop the entry of parasites was used by scientists. They explored the collection of laboratory synthesized libraries of proteins with trillion of entries.

A peptide called ZA1 that fits the Myosin A was discovered by the scientists. Zill e anam stated that they discovered a strong interaction between ZA1 and Myosin A, which is the target. They revealed that ZA1 had the ability to bind myosin A tail and displace MTIP as well, and this novel interaction will certainly not enable the motor machinery of Plasmodium the way it should be. The Myosin A and the peptide binds strongly, obstructing the motor equipment and blocking the parasite attack. Later, they revealed that a shortened peptide originated from ZA1, called ZA1S, was able to enter the parasite and bind to myosin A and prevent the invasion of the parasite.

Professor Ranganathan, the corresponding author of the study said that the concept here was to damage the cycle of the parasite at the extremely primary step when it is attempting to attack our Red blood cells. The other significant benefit of targeting the parasite prior to it enters the blood cell is that it is more vulnerable to drugs than when it gets in the RBCs. The parasite produces a protein once the parasite enters the red blood cells, which makes the infected RBCs from being targeted by our body’s immune system. Therefore, it is tough to target the parasite once it is has entered into RBCs, where it can hide safely from both medicines and our body’s immune system.

The parasites are evolving to resist the medicines and these resistant variants of malarial parasites are positioning a looming hazard. Dr. Singh, the corresponding author of the study said that a major hurdle that is encountered currently in Malaria therapy is the parasite’s non-responsiveness to the currently utilized drugs – chloroquine and artemisinin, and this research is a step forward in that direction. The scientists state that their target is most likely to be conserved, as a result of the prime role of Myosin A in the parasite mobility. The scientists state that the Myosin A region can be strong drug targets as the parasite rarely survives mutations in the Myosin A region. Zill e Anam, believes that the peptide inhibitors can be utilized in combination with other drugs for better anti-malarial effectiveness after appropriate medical research study.

New discovery to battle against malaria