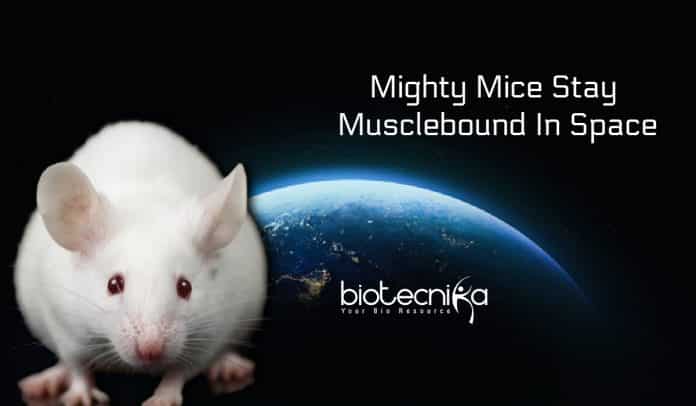 Scientists reported on Monday that after a month-long stay at the International Space Station, the bulked-up mutant “mighty mice” are returning to Earth with ripped bodybuilder physiques.

The findings could provide insights into preventing bone and muscle loss in astronauts during their prolonged space trips like Mars missions, as well as in people who need wheelchairs or confined to bed on Earth.

In December, 40 young black female mice were sent to space station launching aboard a SpaceX rocket by a research team led by Dr. Se-Jin Lee of the Jackson Laboratory.

24 untreated regular mice lost considerable bone and muscle mass in space up to 18% as expected, according to the study published in the Proceedings of the National Academy of Sciences.

Moreover, substantial bigger muscles were observed in eight normal mice that received “mighty mouse” treatment in space and returned to Earth. A pair of proteins that are involved in limiting muscle mass are blocked by the treatment given to the mice that stayed musclebound in space.

All the 40 mice were brought back to Earth in SpaceX capsule in good condition, parachuting into the Pacific off the California coast in January. After returning to Earth, some of the ordinary mice were injected with the “mighty mice” drug and were found to build up muscles very quickly compared to the untreated mice.

Although the results are encouraging, further work is required before it can be tested on humans to build up muscle and bone, without serious side effects. And it could take many more years.

Dr. Emily Germain-Lee of Connecticut Children’s Medical Centre, Lee’s wife, who also took part in the study, said the study pointed out other molecules and signaling pathways worth investigating. The next step of the experiments would be sending more “mighty mice” to the space station for a prolonged stay.

The mice in space were looked after by three NASA astronauts who performed injections and body scans. Jessica Meir, Christina Koch, and Andrew Morgan were those three who are also listed as co-authors.