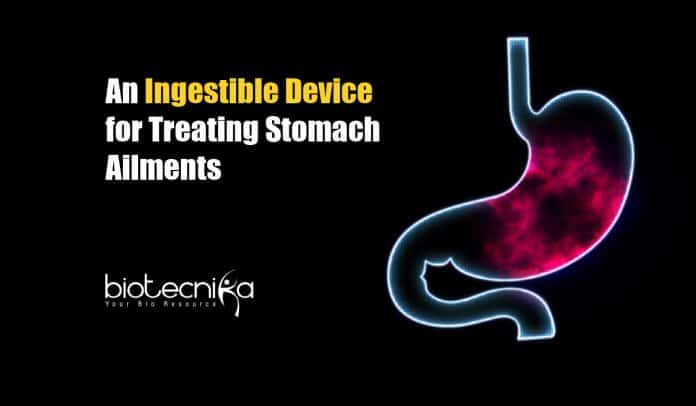 An ingestible device that affixes itself to the stomach wall and treats ailments by delivering electrical pulses has been created by an international team of researchers. The problems with current devices used to treat certain stomach ailments are described by the group in their paper published in the journal Science Advances. They also describe how a wide variety of stomach and bowel problems could be treated with the device they developed.

Medical scientists have learned that the gastrointestinal tract is also involved in chemical processes that regulate critical parts of day-to-day living and a lot more than just digesting our food over the past several decades. There has also been evidence that conditions such as Parkinson’s, Hirschsprung’s, and Alzheimer’s are associated with problems in the gut. Researchers have been studying and trying to treat or cure conditions that derange the GI process because of this. However, it has been proved that treating such conditions is difficult.

Surgery to implant devices is involved in the current approach, and these devices send

The new device has three properties that allow it to adhere properly to the stomach wall and is slightly larger than medicinal capsules. First, to ensure that the device will be situated right side up when it reaches the stomach, it has a bottom weight. Next, to conform to the shape of the wall of the stomach, they designed it with an appropriate shape overall. The final property involves a payload of tiny, sharp, hooks modeled on those of a tapeworm, which allows the device to stay in place as digestion takes place by grabbing hold of the stomach.

In test pigs, the device has worked as planned so far. To make sure there are no unwanted side effects produced by it does in humans, the researchers plan to continue their work.