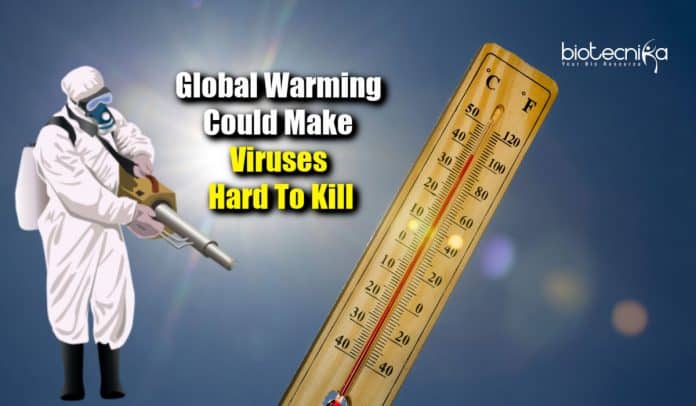 Researchers warn that global warming may make the viruses hard to kill, increasing the threat of some infectious diseases.

A study by Swiss scientists suggests that waterborne viruses may remain infectious for longer since they have adapted to warmer environments, and they are more resistant to disinfectants like chlorine.

Tamar Kohn, associate professor of environmental chemistry at Swiss Federal Institute of Technology in Lausanne, said the health risks posed by viruses would be greater in warm regions, and the microbial water quality may be worse.

High temperatures, sunlight, and other microbes can reduce the spread of disease by deactivating viruses found on surface water. However, the viruses may evolve the way they react to the environment in response to climate change.

The Swiss researchers studied how enteroviruses, a family of viruses that can cause a variety of infections, including polio, foot-and-mouth disease, and colds, may adapt to changing environmental conditions. Enteroviruses are typically spread through feces and find their way into the environment through wastewater, poor sanitation, and sewage.

By incubating samples in flasks of lake water at 10C and 30C, with and without exposure to sunlight, the team created four different populations of human enterovirus. Then the samples were exposed to disinfectant and heat.

The warm-adapted viruses were more resistant to being deactivated by heat than the ones incubated in cold water, found the study published in the American Chemical Society’s Environmental Science and Technology journal. The warm-adapted viruses also remained active longer when moved to cool water and withstood exposure to chlorine better.

Prof Kohn said the findings suggest that an infectious state is persisted for a longer time by viruses in warmer waters, and they are more resistant to disinfection. The results so far suggest that people can be at more risk of infection from swimming or contaminated food because of global warming. But the study on how global warming affects viruses has to be validated further to confirm the results.

Even though the 3C rise in temperature by the end of the century won’t essentially influence virus stability, a heightened disease threat could be brought with an accompanying rise in extreme weather, particularly in hotter countries.

Prof Kohn said they are thinking about more longer duration and frequent occurrence of extreme heat waves that can cause the warming of water bodies in affected areas.