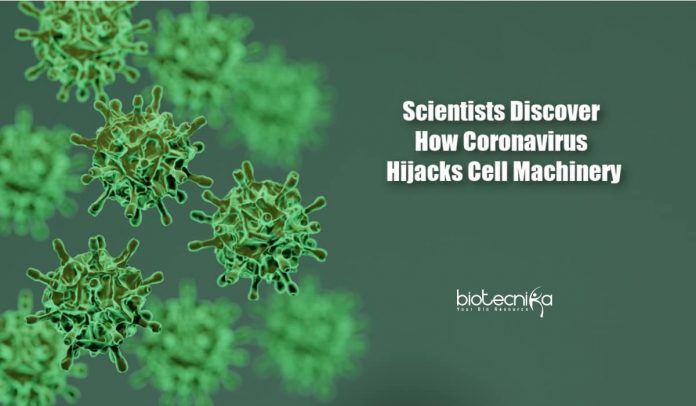 The mechanism by which the novel coronavirus manipulates human cells to ensure its own replication has been discovered by the researchers at the University of Bern and ETH Zurich. This is a breakthrough discovery that could lead to the development of vaccines and drugs against COVID-19.

NSP1 is one of the first viral protein produced after the SARS-CoV-2 virus entered a human cell. From the studies on other coronaviruses, it was already known that NSP1 inhibits the production of the cell’s own proteins. But the mechanism behind this wasn’t clear yet.

Now the scientists have discovered how NSP1 inhibits the production of cellular proteins. The results complement those from independent research on a related topic by a team of researchers in Germany.

Proteins are made by cellular machines called Ribosomes. Ribosomes read the messenger RNA for a specific protein and assemble amino acids in the corresponding order. The mRNA passes through a channel on the ribosome during reading. The scientists showed that the ribosome is blocked by NSP1 that binds to this channel. The binding site of NSP1 in the ribosome channel could be explained at atomic resolution using cryo-electron microscopy.

The potential design of a drug that can prevent NSP1 from binding without interfering with the ribosomal function can be developed using the important information provided by this detailed image. Preventing NSP1 interaction with ribosomes can allow activation of defense mechanisms inside the cell that can stop viral replication.

Using cellular and biochemical experiments, researchers showed that NSP1 alone is sufficient to inhibit protein production. Based on the image of NSP1 binding, they were able to produce modified NSP1 variants that have lost their inhibitory effect. SARS-CoV-2 viruses with modified NSP1 variants will likely be attenuated and no longer cause severe disease. Such attenuated viruses could be used as vaccines.

Besides investigating how coronavirus hijacks cells, the researchers also investigated why viral proteins are produced in large quantities even after the inhibition of NSP1’s ribosomal function. They found that, compared to cellular messenger RNAs, viral RNAs are read more efficiently due to their unique properties.