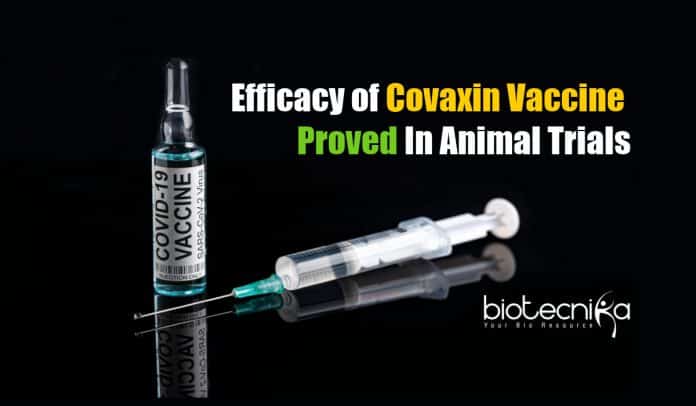 Animal trials of Covaxin, Covid-19 vaccine candidate, by Bharat Biotech International Limited is successful. The results from Phase I of the clinical trial of the vaccine showed remarkable immunogenicity and protective efficacy said the drugmaker.

The vaccine is developed by Bharat Biotech and the Indian Council of Medical Research (ICMR). It is tested at 12 institutes from across the country. The study of the vaccine candidate on primates substantiated its immunogenicity, said the Hyderabad-based firm.

On Friday Bharat Biotech tweeted about the success of Covaxin in the animal trials. They mentioned that in a live viral challenge the vaccine displayed results to demonstrate its protective efficacy.

In a release, Bharat Biotech explained the trial procedures. The inactivated Sar-CoV-2 vaccine (BBV152) or Covaxin’s protective efficacy and immunogenicity were assessed and developed in Rhesus macaques. Four groups with five macaques in each group were formed making a total of twenty Macaques for the trial.

The company said that one group was administered a placebo while the other three were immunized with different candidate vaccines at 0 and 14 days. All the macaques were challenged with Sars-CoV-2 specific IgG and titers of neutralizing antibodies from the third-week post-immunization

According to the statement, different sites were considered for checking the clearance of the Virus. Nasal swab, throat swab, bronchoalveolar lavage fluid, and lung tissues were observed after 7 days post the infection in the groups that were vaccinated.

The vaccinated group does not display any evidence of pneumonia in histopathological examination. There were signs of interstitial pneumonia and localization of the viral antigen in the epithelium of the alveoli and macrophages by immunohistochemistry.

The drugmaker summarised by adding that the candidate vaccine was found to be effective and was able to generate robust immune responses. Thus it can prevent infections and diseases in the primates upon exposure to a high amount of live SARS-CoV-2 virus.

Earlier this month the Central Drugs Standard Control Organisation approved the Phase-II trials to Bharat Biotech. In June the organization announced the successful development of Covaxin, in collaboration with ICMR and NIV.

In India, Covaxin is one of the forerunners in the race for the SARS-CoV-2 vaccine. Covaxin is an inactivated vaccine. The killed or inactivated virus doses are injected with the aim to direct the body to build antibodies to fight it without the virus posing an apparent threat for the host.

The safety and ability to develop an effective immune response by the vaccine are tested at each stage of the clinical trial. The aim of Phase I is to determine the dosage and safety of a small group of healthy volunteers. In Phase II the effectiveness of the virus is observed. In Phase III these very aspects are observed in a much larger population representing a wider demographic.