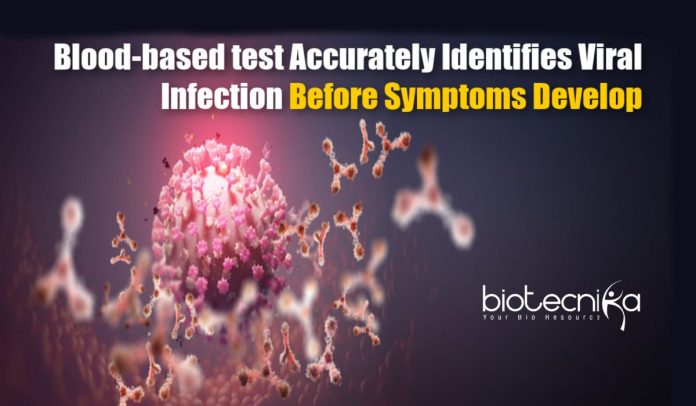 Biomarkers that precisely identify various viral infections across the clinical stages of the infection have been identified by a team of researchers at the Duke Health. Nine distinct respiratory viral infections, which include cold-causing coronaviruses, adenovirus, enterovirus, and influenza, can be correctly predicted by the gene expression assay used in the blood-based test. Before the infected person starts developing symptoms, this test shows the body’s genes responding to a pathogen and detect the infection.

At the Department of Medicine at Duke, an associate professor, also the lead author of the study, Micah McClain, M.D., Ph.D. said that this method could form the basis of new approaches for the early diagnosis and management of emerging viral outbreaks, as their data shows that these biomarkers of viral infection are present and detectable before the infection develops.

He said that they are conducting additional studies for determining the genomic markers’ effectiveness in detecting the COVID-19 causing coronavirus strain, SARS-CoV-2.

In order to develop and fine-tune tests that distinguish bacterial infections from viral infections quickly, McClain has been working on it for years along with his colleagues in the Duke Center for Applied Genomics and Precision Medicine.

Advancing that work, the current study provides a clinically applicable approach to identify a viral infection and also enables identifying the infection before the development of any symptoms, usually before standard viral PCR tests detect the infection.

Between the years 2009 and 2015 at Duke, around 1,465 college students were enrolled by the researchers for their study. The students were monitored for the presence of eight symptoms of respiratory tract infection and its severity for the whole academic year. The enrolled participants had to rate symptoms on a scale of 0-4 and they filled out a daily web-based survey.

The participants of this research study who reported a 6-point increase in a cumulative daily symptom score were considered as the index cases. The team took biospecimens from 264 index cases with clinical ailments, and the conventional PCR testing of nasopharyngeal samples confirmed that 150 of them had a respiratory viral cause.

During the observation of the 555 close contacts enrolled and sampled, it was found that symptoms of respiratory tract infection were developed by 162 people, and the traditional viral PCR testing confirmed that 106 of the 162 people had confirmed illness.

The gene expression test precisely predicted viral infection for most of the participants involved in the study. The infection was predicted before any detectable viral shedding or prior to any symptom onset, up to three days before maximum symptoms start.

In the case of the cold-causing coronavirus strain, the assay was 93% accurate; for adenovirus, it 95% accurate; and was 99% accurate in predicting illness in case of influenza.

McClain said, “This gene expression-based testing approach’s potential is demonstrated in our study. Even at times when people don’t yet feel sick after being exposed to the pathogen, we can detect the viral infection with a high degree of accuracy with the help of the body’s natural immune response signals.”