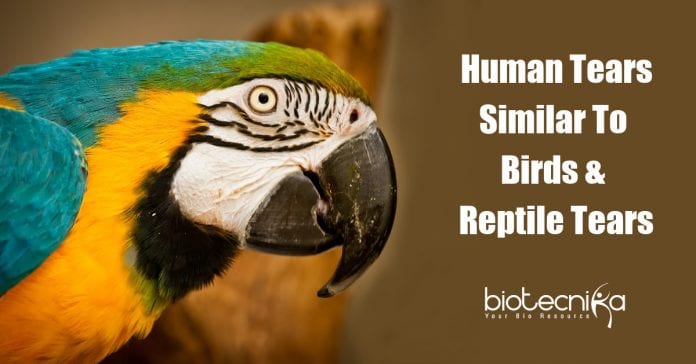 Tears of Birds And Reptiles Similar To Humans

Humans do not resemble birds and reptiles; however, their tears are very much similar.

There was extremely little research done in the composition as well as structures of tears in birds, reptiles, and other mammals, even though the composition of the human tears.

As per a new study carried out published in Frontiers in Veterinary Science, the inadequacy of research could be considered a crying pity, much better eye treatments for both animals and humans can be provided if the makeup of various species’ tears is understood. Understanding animals’ evolutionary adaptations will also be improved with such researches.

Samples of healthy animal tears were collected by the scientists in Brazil from 7 types of birds and reptiles, including turtles, caimans, and sea turtles and macaws, parrots, hawks, and owls.

Arianne Oriá, a professor of clinical veterinary medicine at the Federal University of Bahia in Salvador, Brazil, and lead author of the study

, said that to treat sick animals, it is necessary to understand healthy animals. He added, animals are can not live without vision in the wild; a sea turtle without vision will certainly die.

Likewise, human beings require to have what researchers call a healthy “ocular surface” – the eye’s external layer, consisting of the tears, the edges of the eyelids, and the cornea. Or else they will certainly have a great deal of discomfort, itching, redness, or possibly even more serious eye issues.

Both similarities, as well as differences to human tears that could be key to eye diseases and animal treatments, were discovered in this research. Although human tears are similar to the tears of animals like dogs and horses, there are similar quantities of electrolyte fluid in the tears of humans, birds, and reptiles. However, birds and reptiles had somewhat greater concentrations than humans.

Additionally, the scientists studied the crystallization patterns that form when tears dry, which can provide insight into specific types of eye disease and variations in tear types.

Oriá said that some components of tears (electrolytes) are present at similar concentrations as what is found in humans, although birds, as well as reptiles, have various structures that are responsible for tear synthesis. However, to ensure equilibrium with the different environments and the eyes´ health, the crystal structures are organized in different ways.

The crystal structures showed greater variation in spite of similar tear composition across species. The sea turtle and caiman tears’ crystal structures were one of the most distinct, most likely a product of adjusting to their aquatic settings.

Oriá said that research on tear also offers researchers an essential understanding of the pollution levels and health of animal habitats. This is due to the fact that the surrounding environment has a significant impact on tear make-up, and animals with similar habitats have similar tears.

She added that the tears are one of the most exposed fluids to the environment, so, with subtle modifications to the atmosphere, the tears will modify. For instance, people who smoke have modified tears.

Any modifications to the atmosphere can toss things out of order and have a significant effect on eye health, due to the fact that healthy organisms have ideal tear film for their environments.

Oriá added that if we change our habitat with pollution or something else, we will produce an unhealthy environment for our tear film, so to re-adapt to the environment, animals and humans will take many years.

Oriá said that in numerous parts of the globe, habitats are being polluted and damaged faster than animals – and humans – can adapt.

Further study is required in this field to increase the understanding of more species’ tears and to translate those findings into treatments for eye diseases in humans and animals. The understanding of the species’ evolution and adaption can be gained with such researches.