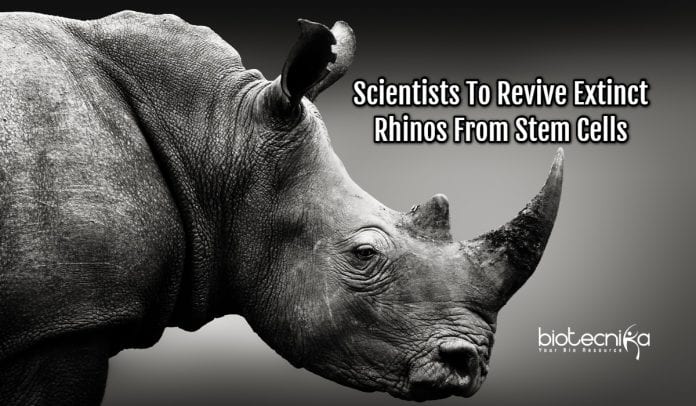 Reviving Rhinos From Stem Cells To Bring Back The Extinct Species

Using cells from Iman and two other dead rhinos, scientists are now planning to bring back the Malaysian variant of the Sumatran rhinoceros with the help of experimental stem cell biology.

Muhammad Lokman, a molecular biologist at the International Islamic University of Malaysia, said he is very confident that it’s possible if everything works well and if everyone supports them.

In 2015, one of the world’s smallest rhinos, the Sumatran species, was declared to be extinct in the Malaysian wild. The increased hunting and forest clearance reduced the numbers of these species once roamed across in India to just 80 in Indonesia.

Within six months of the death of Malaysia’s last male rhino, Tam, Iman, died at the age of 25 in a nature reserve on Borneo island, following massive blood loss caused by uterine tumors. Efforts were made to breed these two, which did not work.

John Payne of the Borneo Rhino Alliance (BORA), who has campaigned for about four decades to save Malaysia’s rhinos

, said Tam was equivalent to a 70-year-old man whose sperms were not expected to be good of course. So to increase the chance of breeding, the sperm and eggs of rhinos in Indonesia had to be collected, for which Indonesia didn’t show much interest yet.

Discussions are going on with conservationists in Indonesia, whose environment ministry disputed accusations of cross-border rivalry as a reason why Malaysia’s rhinos died out.

Indra Exploitasia, the ministry’s director for biodiversity conservation, said the implementation must be in accordance with the regulation of each country as this is part of diplomatic relations.

Now the scientists in Malaysia are planning to use cells from dead rhinos to produce eggs and sperms that can be used to yield test-tube babies. These test tube babies can be implanted into any closely related species like a horse. Scientists have a similar plan for African northern white rhinoceros, whose numbers left is just two. In 2018, they had succeeded in producing embryonic stem cells for the southern white rhino.

The researchers leading the research, Cesare Galli and Thomas Hildebrandt, said the process is still far from developing a whole new animal.

But the lack of genetic diversity in animals could pose a threat to their long term survival even if the process of reviving rhinos from stem cells worked.

Arief Boediono from Indonesia is helping out those in Malaysia, hoping to learn from them so that rhinos in his country can be rescued.

There has been success involving lab rats in Japan, who have grown teeth and organs like kidneys and pancreas using embryonic stem cells from rats and mice. This means there is a chance but could take five to twenty years, added Arief. For now, Iman’s hide will be stuffed and displayed beside Tam’s in a Borneo museum.