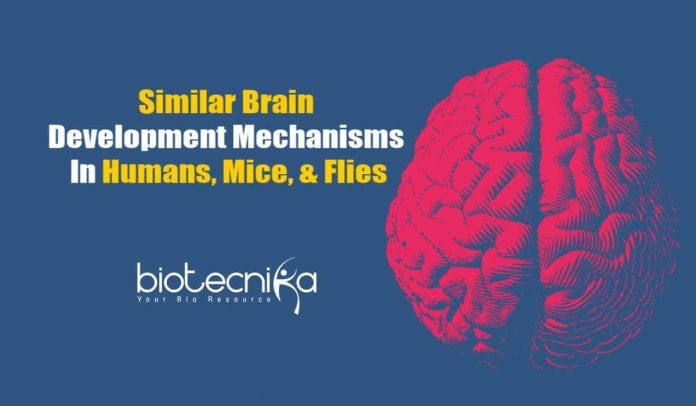 Humans & Flies Use Similar Mechanisms For
Brain Development and Function

The subtle changes that can occur in genes and brain circuits can be potentially better understand by scientists with these new findings.

Research has found that the brains of humans, mice, and flies, are similar in how they function and how they form, although physically very different. According to the research data, it is shown that the brain development of insects and mammals is underlined by similar genetic mechanisms. However, this can be interpreted in two different ways, some believe it could support the theory that brains evolved multiple times independently while some believe that it provides evidence of one single ancestor for both mammals and insects.

Strong evidence that the mechanisms that regulate gene activity required for the formation of brain areas important to control behavior are the same for insects and mammals has been provided by the collaborative study between Leibniz Institute DSMZ, University of Leuven, University of Arizona, and King’s College London, published in the journal Proceedings of the National Academy of Sciences (PNAS).

The researchers have demonstrated that the insects and mammals experience very similar behavioral problems when these regulatory mechanisms are inhibited or impaired in them. This suggests that the same building blocks that control the activity of genes are essential to both the behavior-related functions they perform and the formation of brain circuits. This provides evidence that one common ancestor established these mechanisms, according to the researchers.

From the Institute of Psychiatry, Psychology & Neuroscience (IoPPN), King’s College London, Dr. Frank Hirth, the senior author on the study said, “Evidence of the source of similarities between human and flies’ brains, how they function and how they form, is provided for the first time in our study. Our research shows that similar mechanisms in humans, flies, and mice put in place the brain circuits essential for coordinated behavior. This suggests that a common ancestral brain more than a half-billion years ago gave rise to the evolution of their very different brains.”

At the University of Arizona, Regents Professor of Neuroscience and a co-author on the study, Nicholas Strausfeld said that information on how the brain evolved is still a jigsaw puzzle, however, a very early origin of essential circuits that, over an immense span of time have been maintained, although with modification, across the great variation of brains we see today is suggested by the pieces currently being added to this puzzle.

The study focussed on the midbrain-hindbrain boundary (MHB) in vertebrates including humans and those areas of the brain known as the deutocerebral-tritocerebral boundary (DTB) in flies. In the formation of the brain circuits that are responsible for basic motion in the DTB in flies and MHB in humans, the genes that play a major role were identified by the researchers using genomic data. Then, they ascertained the cis-regulatory elements, the parts of the genome that control when and where these genes are expressed.

The results indicated that humans, flies, and mice share the same fundamental genetic mechanism by which these brain areas develop as researchers found that these cis-regulatory elements are very similar in all three. A subsequent impairment in behavior was demonstrated by the researchers by the manipulation of the relevant genomic regions in flies in such a way that they no longer appropriately regulate the genes. This correlates to findings from research with people where behavioral problems including autism spectrum disorders and anxiety have been associated with mutations in the regulated genes or the gene regulatory sequences.

Dr. Hirth said, “Scientists have been trying to figure out the mechanistic basis behind behavior for many years. We have identified these basic genetic regulatory mechanisms required for midbrain circuit formation and function and have discovered a crucial part of the jigsaw puzzle. Answers to what happens when things go wrong at a genetic level to cause these disorders can be found if we can understand these very small, very basic building blocks, how they form and function.”