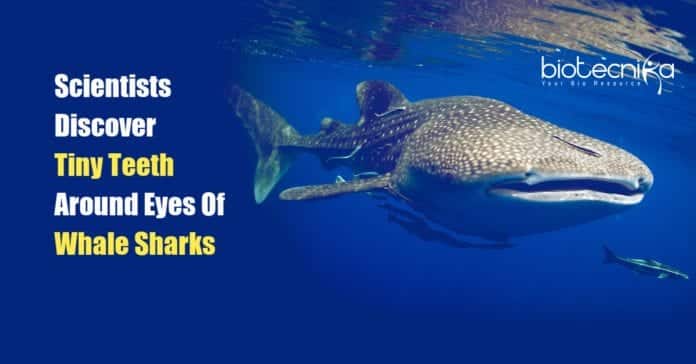 Whale Sharks Have Tiny Protective “Teeth” around Their Eyeballs

A group of scientists from Japan’s Okinawa Churashima Research Center has discovered that whale sharks have thousands of dermal denticles (tiny teeth) in the skin surrounding their eyeballs. The study was published in the open-access site PLOS ONE. In the research paper, the team explains their research of the teeth and suggests possible functions.

Whale sharks, as their name suggests, are very large – they can grow to be 18 meters long. They are unique in other ways, as well – they mostly eat plankton, and most other sharks have eyes in front of their head but whale sharks have eyes on the sides of their heads. If need to protect them from other creatures in the sea, they can also retract their eyes and they do not have eyelids, unlike most other sharks. Currently, scientists have discovered that tiny teeth are surrounding their eye coverings.

The scientists studied the eyes of both living and dead animals from aquariums and those washed up on shore, as part of an effort to learn more about whale sharks. They found that the eye coverings are covered in dermal denticles. Whale sharks have protruding eyes contained in a casing that bulges out into the water, and on its tip is the eye’s visible part. The study discovered that except for the visible eye parts the entire casing is covered in dermal denticles similar to human molars (oak-like shaped).

The previous studies had shown that whale sharks have dermal denticles on other parts of their body – in fact, on most of their body have dermal denticles. Sharks have placoid scales, unlike the scales of other animals, the scales of sharks are made of hard enamel and resemble teeth. Of course, such tiny teeth are not used for chewing, they are used for protection from other sea creatures as their hardness makes it very difficult for other sharks to bite them. Additionally, the scales are arranged in a way that helps the shark swim faster.

The scientists discovered that each eye covering of the whale shark had approximately 3,000 denticles and the denticles were most densely packed near the iris.