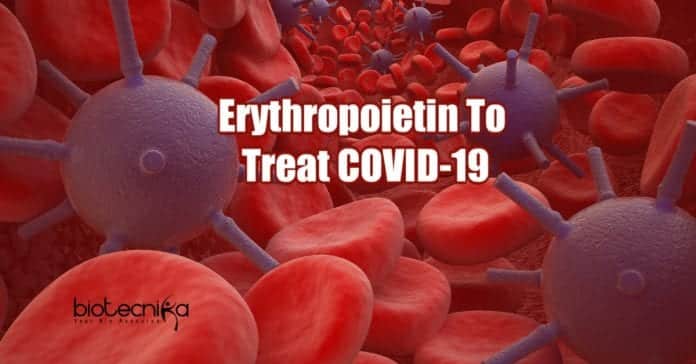 Erythropoietin (Epo) is a drug for anemia. The doping agent, Epo can also be effective against COVID-19, as per the scientists at Max Planck Institute of Experimental Medicine in Göttingen. When the SARS-CoV-2 attacks the brain, the growth aspect can mitigate serious disease development and protect people from long-term neurological impacts. Primary case studies suggest a favorable effect of erythropoietin. Currently, scientists are planning a randomized clinical trial to systematically investigate the effects of treating COVID-19 using Erythropoietin.

A person with extreme COVID-19 symptoms was admitted to an Iranian healthcare facility at the end of March. The medical professionals prescribed the hematopoietic growth factor Epo as the person also had poor blood values. The patient was able to leave the healthcare facility 7 days after the beginning of therapy.

An additional protective role of Epo in the case of COVID-19 originates from South America, where compared to the lowlands, severe illness is rarer in higher-lying regions. This might be because people living at higher altitudes have more red blood cells and thus form more Epo and are better adapted to oxygen shortage. Could erythropoietin have contributed to the fast recovery of the Iranian patient as well as could it likewise explain the different frequency of the disease in South America?

Hannelore Ehrenreich, a scientist, the Max Planck Institute of Experimental Medicine believes this is actually feasible. She has been studying the effect of the endogenous growth aspect for over three decades and believes a connection between mild disease progression as well as the administration of Epo. Ehrenreich said, for instance, we have observed that dialysis patients withstand COVID-19 incredibly well – and it is exactly these people that routinely receive erythropoietin administration.

Normally, as a natural reaction to oxygen deficiency erythropoietin is released in the body. The molecule promotes the development of RBCs and hence improves the supply of oxygen to the muscles and brain. Also, this effect is used by professional athletes who take artificial Epo as a doping agent. Epo stimulates not just blood cells but also lots of various other tissues.

Ehrenreich as well as her coworkers have actually now summed up the numerous research studies on the impacts of erythropoietin. As per the animal experiments, Epo acts on areas of the brain stem as well as the spinal cord that controls breathing. Consequently, when there is an oxygen deficiency the breathing improves. Additionally, Epo has an anti-inflammatory impact on immune cells, hence could attenuate the frequently exaggerated immune reaction in patients with COVID-19 infection. It can also protect from neurological symptoms and lasting impacts of the disease such as seizures, dizziness, headaches, and loss of odor and taste.

Experiments in animals and humans with various brain disorders showed the protective results of Epo. Regrettably, pharmaceutical companies have just minimal interest in financing further studies on approved active components such as erythropoietin for which patent protection has actually ended. Ehrenreich said, since COVID-19 can have such severe health-related consequences, we should explore any kind of evidence of a protective effect of Epo. Besides, there is presently neither a vaccine neither a medicine for the condition. That is why we are currently preparing a ‘proof-of-concept research’ to investigate the effect of Epo on COVID-19 in humans,” says Ehrenreich. In this clinical trial, seriously sick COVID-19 individuals will certainly additionally receive erythropoietin. After that, scientists will explore whether the development factor can reduce serious disease development.