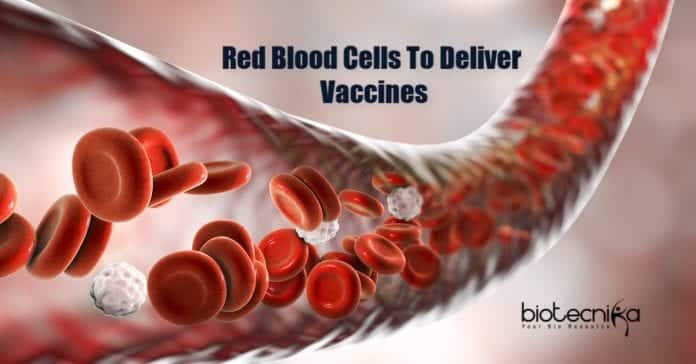 An innate immune function of red blood cells has been harnessed by the researchers at the John A Paulson School of Engineering and Applied Sciences (SEAS) and the Harvard’s Wyss Institute for Biologically Inspired Engineering to build a platform technology that uses erythrocytes to deliver antigens to immune system antigen-presenting cells (APCs) in the spleen, generating an immune response.

The new technology called erythrocyte-driven immune targeting (EDIT) has been initially observed to slow down the growth of cancerous tumors in mice. The erythrocytes carrying nanoparticles could be used as a biocompatible adjuvant for a variety of vaccines, suggested the team.

While generating an immune response, the spleen is one of the best organs to target because it is one of the few organs where white and red blood cells naturally interact.

It was only recently discovered that red blood cells have an innate ability to transfer attached pathogens to immune cells. And this discovery could lead to many advancements in using human cells for disease prevention and treatment. The new technology was reported in the journal Proceedings of the National Academy of Sciences (PNAS).

The primary role of red blood cells is to transport oxygen, and they account for more than 80% of cells in the human body. However, they also actively take part in the innate immune system. The research team explained that red blood cells present certain bacterial pathogens in the circulation to the APCs in the spleen after killing them through oxidative stress. A biomimetic strategy, erythrocyte-driven immune targeting to target spleen, can be developed from this, which leverages antigen presentation to the spleen from the surface of the erythrocyte.

Although the idea of using RBCs to deliver drugs or vaccines is not a new idea, most of the technologies until now targeted lungs. But the dense network of capillaries in the lungs squeeze RBCs as they pass through the tiny vessels causing the cargoes to shear off. Delivering cargo to the spleen becomes challenging due to this.

So the researchers had to figure out how to stock antigens strongly to red blood cells so that they can resist shearing off in the lungs and reach the spleen to make their strategy work. They incubated mouse RBCs with polystyrene nanoparticles coated with an antigenic protein that can induce a mild immune response called ovalbumin. This resulted in a moderate expression of a lipid molecule called phosphatidylserine (PS) on the cells’ membranes and the retention of nearly 80% of the nanoparticles even after the cells were exposed to the shear stress found in lung capillaries.

A high level of PS on red blood cells can cause the spleen to digest them when they are damaged or stressed. Researchers wanted to avoid this. A low level of PS, on the other hand, will promote spleen’s APC’s to check red blood cells and take up the antigen-coated nanoparticles on RBCs.

To test this strategy, they injected the coated RBCs into mice and tracked their accumulation. More than 99% of nanoparticles were cleared from the blood after 20 minutes, and spleen had more nanoparticles compared to lungs. The nanoparticles remained in the spleen for 24 hours and the EDIT RBCs in the blood, which confirmed that they have successfully delivered the cargoes without being destroyed. Moreover, the nanoparticles induced an immune response and produced more antibodies in mice.

They also checked if the immune response could potentially treat diseases. The mice injected with nanoparticles coated with ovalbumin had 3-fold slower tumor growth compared with the control group. The time window during which the tumor can be treated could be significantly increased using this method.

Moreover, EDIT could be used as an adjuvant-free vaccine platform. For centuries, red blood cells have been safely transfused into patients, and this makes RBCs a safe alternative to foreign adjuvants to deliver the vaccine.

The team is currently studying how exactly spleen’s APCs generate an immune response that is specific to the antigen presented by EDIT. Basically, the technology facilitates a new way to deliver nanoparticles to the spleen, without the necessity of extensive modifications to the nanoparticles themselves.

Using RBCs to deliver vaccines is a unique way of propelling the development of vaccines using adjuvant-free therapies based on the ‘self’ cell of the body.