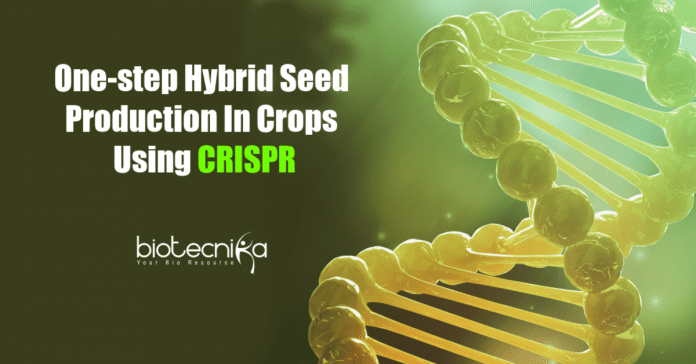 Crop hybrid technologies have actually contributed to the substantial yield improvement around the world in the past decades. Nonetheless, designing and maintaining a hybrid production line has constantly been intricate and arduous as well. A new system combining the CRISPR-mediated genome edited with various other methods that could produce better seeds compared to traditional hybrid approaches and shorten the production period by five to ten years is currently developed by the Chinese scientists.

Compared to purebreds, hybrids are preferred in plant production. Progeny with premium traits compared to the parents is yielded by crossing 2 genetically distant plant varieties. Higher yields and better disease resistance is seen in these offspring. This phenomenon is known as hybrid vigor or heterosis.

For instance, discovering or making a type of parent plant carrying a mutation, to make sure that it does not produce viable pollen, is the first step to produce a hybrid. This is to make sure that most of the parent plants become fertilized by a different variety and avoid self-crossing. However, to self-cross in order to produce more of itself and plants to be utilized as the parent, the progeny should be fertile. To restore the plant’s sterility and make hybrid seeds researchers would certainly cross the sterile plant with another that is genetically fertile. Creating a production cycle such as this is important in developing an efficient seed production line in the field.

These methods have very particular needs of plants’ genotypes, as well as it can take several years for establishing steady infertile and fertile breeds.

Xie said in commercial agriculture these constraints have limited them from being applied much more widely. However, our new system making use of CRISPR/Cas9 can significantly enhance the procedure. Currently, one single transformation sufficient.

Initially, a Cas9 vector that targets MS26 – a fertility gene in maize was developed by Xie and his colleagues. Additionally, they prepared MGM – a second vector. Cutting out a sector of the MS26, which would certainly make the plant genetically sterile is how the initial vector functions. 3 functional parts are present in the MGM vector: a functioning MS26 gene coding sequence to restore fertility, a red color marker that would display in seeds, and an enzyme to inactive pollen.

Both vectors were introduced by the researchers into an agrobacterium and it was used to alter the embryos of the maize. Since maize is diploid – it has 2 copies of each gene – these modified embryos would carry a single copy of the introduced MGM gene and 2 copies of mutated MS26.

The MGM gene is present in the other half of the offspring, and MGM-present offspring are basically the like their parents and fertile, these plants – called the maintainers. To produce more maintainers and hybrids, these maintainers can be self-crossed to make more sterile plants.

Xie said that our system substantially reduces the resources needed to construct stable hybrid seed production lines and hence the inputs, as well as the costs of seeds, would certainly be a lot reduced.

He added, numerous other major plants also have MS26 other than maize, including sorghum, rice, wheat, and millet. As a result, the new technique can be easily applied to other fertility-determining genes in crops or other crops.

Xie said we are not far from large scale applications technology-wise, however, there is a procedure we require to undergo prior to getting approved for commercial production.

The outcomes of the research study on ‘One-step hybrid seed production in crops using CRISPR’ are published in the journal Molecular Plant on July 8.