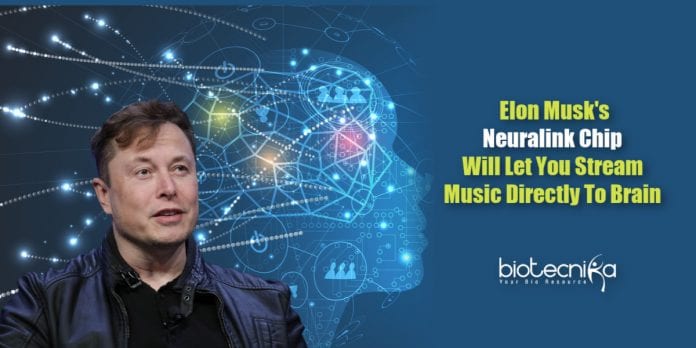 A Brain-Computer Interface By Neuralink

A brain-computer interface is being developed by Elon Musk‘s mysterious Neuralink startup, that would allow wearers to stream music directly into the brain, claimed the entrepreneur of the technology.

Mr. Musk, who also heads Tesla and SpaceX, has been slowly releasing the details of the mysterious startup over Twitter last dew days, but more details are set to reveal next month.

The Neuralink’s technology would make it possible for people to “listen to music directly from our chips,” Mr. Musk said while responding to computer scientist Austin Howard. Neuralink can also help people to control their hormone levels and use them to their advantage, he added.

Neuralink has kept only one major public presentation about their technology since it was founded in 2016.

While speaking at the 2019 event, Mr. Musk said they are working on a device, like a sewing machine that would provide ‘threads’ that connect a chip inserted in brains to computers.

People suffering from brain diseases like Parkinson’s could get help from this technology, but helping humans to compete with advanced artificial intelligence would be the ultimate goal of the company.

According to Mr.Musk, the process of fitting the chip inside

the brain will be similar to Lasik laser eye surgery. A neurosurgical robot is also being developed to fit the “threads” into the brain connected to a tiny implantable computer chip. A single USB-C cable will provide “full-bandwidth data streaming” to the brain, claimed the research paper detailing the device.

Eleven job postings, offering roles for histology technician, robotics software engineer, and a mechanical engineer has been posted by Neuralink on its website.

Mr. Musk recently tweeted that anyone who have solved problems with phones/ wearables (signal processing, sealing, power management, inductive charging, etc.), could have an opportunity at Neuralink.

Learning to use the device is like learning to play the piano, said Neuralink. The chip can retrain the parts of the brain responsible for depression and addiction and cure them.

The technology has already been tested on animals, and human trials are expected to start this year. More details will be announced on August 28th.