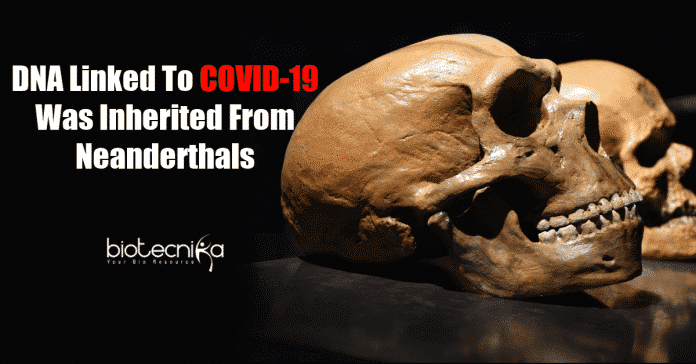 DNA linked to COVID-19 was inherited from Neanderthals

According to a new research study, a stretch of DNA linked to COVID-19 was passed 60,000 years ago from Neanderthals.

However, researchers don’t yet know how the risk of severe disease from the SARS-CoV-2 is raised due to this particular segment. However, the new findings demonstrate how some clues to modern health come from ancient history. The study is still not published in any journal as of now, but the findings are posted online.

Joshua Akey, a geneticist, Princeton University (who was not involved in this study) said that this 60,000 years old interbreeding effect is still having an impact now.

The research found that this piece of the genome, which spans 6 genes on Chromosome 3, has had a confusing journey with human history. Currently, this gene variant is common in Bangladesh, where 63% of individuals carry a minimum of one copy. Almost one-third of people have acquired the segment across all of South Asia.

However, this segment is much rare. Only 8% of Europeans carry it, only 4% have it in East Asia, and in Africa, it is almost completely absent.

It’s unclear that over the past 60,000 years, what evolutionary pattern produced this distribution. Hugo Zeberg, a geneticist, the Karolinska Institute, Sweden, one of the authors of the study said that this is a $10,000 question.

A chance of such a distribution might be – the Neanderthal version is harmful and has been getting rarer with time, additionally, it’s likewise possible that the segment improved the health of individuals in South Asia, possibly supplying strong immune responses to viruses in that particular area.

Svante Paabo (Dr Zeberg’s co-author), the director, Max Planck Institute for Evolutionary Anthropology, Leipzig, Germany said that one should worry that now this is pure conjecture.

Scientists are just beginning to comprehend why COVID-19 is a lot more harmful to some individuals than others. Older individuals are most likely to end up being seriously ill than young people, as well as compared to women, men are at higher risk.

In the U.S, compared to the white people, black people are even more likely to be severely ill from the COVID-19, for example, most likely due in part to the nation’s history of systemic racism, which has left Black people with a high rate of chronic diseases such as diabetic issues, as well as living conditions and jobs that might increase exposure to the infection.

Genes also play a role. The previous month, scientists contrasted individuals in Italy and Spain who had had only moderate infections and those who became very sick with COVID-19. Two places in the genome associated with a higher threat were discovered by scientists. One is on Chromosome 9 and also consists of ABO, a gene that establishes the blood group and the other one is on Chromosome 3 having the Neanderthal segment.

However, these genetic findings are being swiftly updated as more individuals infected with COVID-19 are examined. Recently, a global team of scientists called the COVID-19 Host Genetics Initiative released a new set of data minimizing the threat of blood group. Mark Daly, a geneticist, Harvard Medical School, a member of the initiative said that the board is still out on the ABO gene.

Dr. Hugo Zeberg decided to find out if the Chromosome 3 segment was passed from Neanderthals after the new batch of information came.

Some modern human ancestors expanded out of Africa and swept across Australia, Asia, and Europe about 60,000 years ago. These people interbred with Neanderthals. The Neanderthal DNA spread down the generations when Neanderthal DNA entered our gene pool, long after Neanderthals became extinct.

However, some genes have become quite common as they appear to have offered an evolutionary side. Dr. Janet Kelso, Dr. Zeberg, and Dr. Paabo discovered that one-third of European females have a Neanderthal hormone receptor. It is related to fewer miscarriages and higher fertility.

Dr. Zeberg understood that Neanderthal genes that prevail today also help us fight viruses. The modern humans may have experienced new viruses when expanded into Europe and Asia, for which Neanderthals had already evolved defenses and ever since we have held onto those genes.

In an online database of Neanderthal genomes, Dr. Zeberg took a look at Chromosome 3. He found that the version that increases people’s threat of extreme COVID-19 infection is the same version found in a Neanderthal that lived in Croatia 50,000 years earlier. In an interview Dr. Zeberg said, referring to Dr. Paabo that he texted Svante immediately.

Dr. Paabo was on vacation in the remote Swedish countryside. The very next day, Dr. Zeberg showed up, and they worked day and night up until they posted the research study online.

Dr. Paabo said that it’s one of the most insane trips he has ever had before.

Tony Capra, a geneticist, Vanderbilt University (who was not associated with the study), thought it was plausible that the Neanderthal piece of DNA initially gave a benefit – possibly even against other viruses. He said, however, that was 40,000 years back, and here we are now.

It is feasible that an immune action has ended up overreacting against the SARS-CoV-2 which worked against ancient viruses. The immune systems of the COVID-19 patients launch uncontrolled attacks that end up scarring their lungs and causing inflammation which results in severe COVID-19 cases.

The DNA segment might account partly for why people of Bangladeshi descent are passing away at a high rate of COVID-19 in the UK.

DNA linked to COVID-19 was inherited from Neanderthals