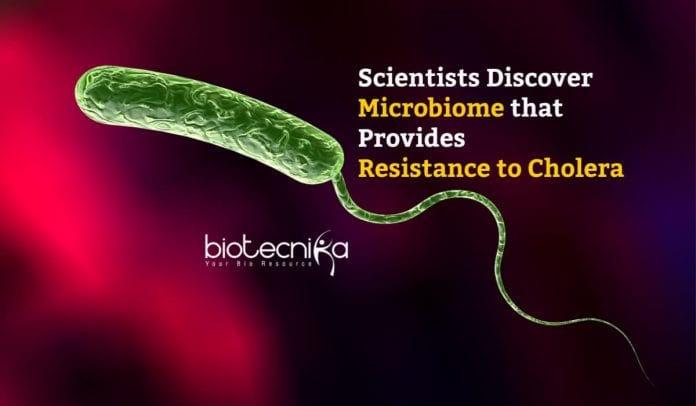 Around 4 million people a year are sickened by cholera and if left untreated, cholera can kill within hours. How gut bacteria help people resist the disease is described by the researchers in a new article in the journal Cell.

Bacteria is present everywhere on the planet, including on and inside the human body. Ansel Hsiao, UCR microbiologist studies to know if the human microbiome, the collective bacteria living in our bodies, can protect people from diseases caused by external bacteria such as the ones that live in waterways and cause cholera, the Vibrio cholerae.

Many people suffer from cholera due to contaminated water, food, and poor sanitation infrastructure in Bangladesh, the Hsiao’s team examined the gut microbiomes from the people from here. Hsiao explained, “Diarrhea gets flushed into water systems that people drink from when people get sick and this is a negative cycle.”

This research team wanted to see if people are more vulnerable due to prior infections or other stresses, in contrast to Americans who don’t face these same problems.

The group anticipated that stressed Bangladeshi microbiomes would allow for higher rates of infection, but the findings surprised the group. Instead, the results suggested that susceptibility is not based on the place they’re from rather on a person’s unique microbiome composition as they saw infection rates varied greatly among individuals in both populations.

Vibrio cholerae doesn’t usually encounter bile, which mammals produce to help digest fats after a meal and it spends most of its time outside of humans in aquatic environments

Hsiao said, “Many microorganisms, including cholerae, have evolved ways to deal with bile as it is specific to the intestines of humans and animals.”

The previously dormant genes that enable Vibrio cholerae to survive in its human host are triggered due to the presence of bile and lack of oxygen in the gut once Vibrio cholerae enters a body. These genes help Vibrio cholerae attach to intestinal walls and cause diarrhea and are responsible for cholera’s virulence.

Blautia obeum, a bacterium in the human microbiome was identified by Hsiao’s team, which can prevent Vibrio cholerae from colonizing the intestines as it can deactivate the cholera bacterium’s disease-causing mechanisms. The mechanism of how this is accomplished was also figured out by the team.

An enzyme that degrades salts in bile is produced by Blautia obeum, and to control gene activity, Vibrio cholerae uses this as signals. The bacteria that causes cholera does not receive the signal to activate the dormant genes that cause infection when these bile salts are corrupted.

A focus of future studies will be on how to increase the presence of Blautia obeum in the gut since it has become clear that more Blautia obeum makes people less susceptible to cholera. Hsiao said, “We are keenly interested now in understanding which environmental factors, such as diet, can increase the obeum levels.”

Similar studies with regard to the SARS-CoV-2 virus, which is causing another global pandemic, are also underway. To understand how the microbiome changes with COVID-19 infection, Hsiao is collaborating with several groups.

Hsiao said, “We might one day understand if microbiome affects COVID-19 and how it affects, and how it makes people resistant to other illnesses we don’t have treatments for currently.”