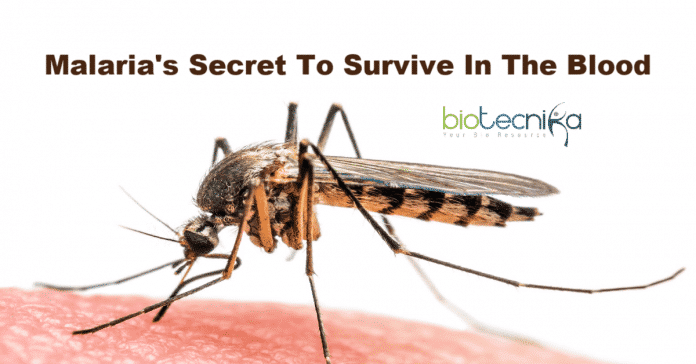 Researchers uncover malaria’s secret to surviving in the blood

A new research study from the Francis Crick Institute has found how the malaria parasite secures itself from toxic compounds in Red Blood Cells.

Around 400,000 deaths around the world are caused by malaria every year. Malaria is a mosquito-borne infectious disease that affects humans and other animals and caused by plasmodium parasites that are transmitted by mosquitoes and grow in the bloodstream od humans.

The researchers from Francis Crick Institute along with associates from Germany and Switzerland identified a protein used by the malaria parasites to shield itself from a toxic substance present in RBCs. The researchers hope this could bring about the advancement of drugs that block this mechanism.

Malaria parasite digests hemoglobin when it enters into a red blood cell, triggering the release of a compound called haem, and if it is left loose inside the cell, it is hazardous to the parasite.

The study found that the parasite uses a protein, called PV5 to conquer this – to control a process where free haem molecules are joined into insoluble crystals which are not hazardous, this is crucial to the survival of the malaria parasite.

The researchers found that the human-infecting malaria parasite made fewer and highly misshapen crystals when the scientists obstructed this protein in the laboratory. The parasite became more sensitive to several antimalarial drugs when the protein was obstructed in mice that had been infected with a rodent strain of malaria.

The relevance of haem crystallization to malaria has been understood for a while, however, what has been missing is knowledge regarding exactly how this process is managed by the parasite. We’ve shed light on potential new therapies that can stop malaria in its tracks by determining a protein that is vital to this process, said Joachim Matz, lead author of the study and postdoctoral research fellow in the Malaria Biochemistry Laboratory, the Crick

The problem of malaria developing resistance to antimalarial drugs is of severe concern. The malaria parasite is already resistant to lots of medicines and this underpins the requirement to discover new therapy, said Mike Blackman, author and group leader of the Malaria Biochemistry Laboratory at the Crick.

He added that they anticipate that valuable understandings for the advancement of future medicines for malaria will be offered by an enhanced understanding of the mechanisms at play during this haem crystallization process.

With the aim of identifying the precise mechanism behind this process, the scientists will certainly remain to examine the role of PV5 during haem crystallization.

The outcomes of the research on “malaria’s secret to surviving in the blood” are released in the journal Proceedings of the National Academy of Sciences of the United States of America.