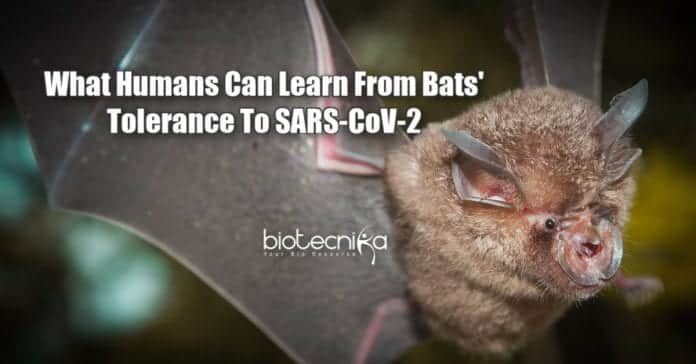 Many viruses affecting humans, including rabies, SARS-CoV-2, and Ebola, are considered to be originated from bats. Even though humans are badly affected by these viruses, bats are tolerant of them and live much longer than similar-sized land animals.

How are bats resistant to viruses?

According to the University of Rochester researchers, bats’ ability to control inflammation is responsible for its capacity and longevity to tolerate viruses. The researchers tried to understand the mechanisms underlying the unique abilities of bats and how these mechanisms hold clues to developing new treatments. The findings were published in the journal, Cell Metabolism.

Rochester biology professors Vera Gorbunova and Andrei Seluanov were quarantined at the home of Brian Kennedy, director of the Centre for Healthy Aging at the National University of Singapore when the COVID-19 started to spread. All three scientists who were experts on longevity in mammals thus got an opportunity to talk about bats.

The origin of the novel coronavirus is believed to be bats, which are the natural reservoirs of these viruses. But the virus doesn’t harm bats. Moreover, bats have a lifespan of 30 to 40 years, which is much longer compared to other species of similar size.

This was the first time scientists combined the studies of bat’s longevity with their immune response. From the studies they had on exceptionally long-lived animals like naked mole rats, they realized inflammation is a hallmark of the aging process and age-related diseases, including Alzheimer’s, cancer, and cardiovascular disease.

The inflammatory response in humans to COVID-19 infection is intended to kill the virus and fight infection but ends up harmful to the human body as it overreacts to the threat. But bats have specific mechanisms that lower the immune response to the virus as well as reduce viral replication. As a result, bats can control viruses but, at the same time, do not mount a strong inflammatory response.

Why Are Bats Tolerant To Viruses? How Bats Fight COVID-19?

According to researchers, several factors contribute to bats’ resistance to viruses. Their ability to fly could be one factor. They are the only mammals with the ability to fly, which requires them to adapt to molecular damage, sudden surges in metabolism, and rapid increase in temperature. These adaptations could help them in disease resistance.

The environment could be another factor. Many species of bats live in dense, large colonies and hang close together in trees or cave ceilings, which are ideal for transmitting pathogens like viruses. They always fly out, bringing back something to the cave and transfer the virus easily as they live close to each other.

As bats constantly encounter with pathogens, their immune system evolves a mechanism to combat the pathogen, and the pathogen will evolve again, and so on. The bats’ immunity and longevity are being shaped by viruses and other pathogens.

How Bats Can Offer Clues To Fighting SARS-CoV-2

It takes thousands of years for evolution, and it doesn’t happen in a couple of months. The majority of the human population started living in close proximity in cities very recently. And not long ago, rapid mobility and travel across continents became a common thing. Though humans are developing social habits similar to bats, we haven’t yet evolved mechanisms to combat viruses.

The human body experiences more inflammation and aging play a major role in the immune response to COVID-19. Gorbunova said older people have a different COVID-19 pathogenesis. And aging needs to be treated as a whole process rather than treating individual symptoms.

New targets for human therapies to fight aging and diseases can be provided by studying the bats’ immune systems. For example, bats lack or mutated many genes involved in inflammation. Similar genes in humans could be inhibited using drugs. To work towards this goal, Seluanov and Gorbunova are hoping to start a new research program at Rochester.

By preventing inflammation, humans could live longer and prevent diseases like COVID-19. Preventing exposure to viruses is not a practical solution. But by understanding how bats fight COVID-19 and regulating our immune system more like a bat, we could protect ourselves from such diseases.