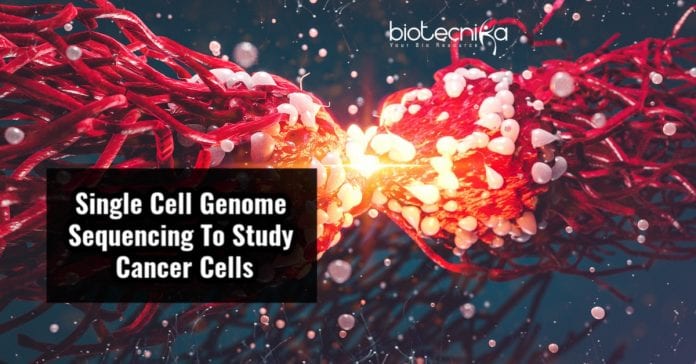 Millions of tumor cells are sequenced together to obtain genetic information of a tumor. But this method can miss a small population of cancer cells within a tumor that are different from the majority of cells, as it offers only a broad view of the genetic makeup of the tissue. More insights into how cancer progresses and why it is resistant to drugs can be understood if these sub-clones in cancer tissue can be identified. Due to the current limitations of genomic sequencing, it’s been a challenge to understand the genetic diversity of individual cells within a tumor.

USC researchers have developed a new technique using high-throughput single-cell DNA sequencing and 10x Genomics that offers a higher resolution view into cancer, which was not possible before. The researchers simultaneously sequenced the genomes of nearly 1,500 single cells individually using a microfluidic droplet-based single-cell sequencing method. This revealed the previously hidden genetic diversity of melanoma cells.

David Craig, Ph.D., co-director of the Institute of Translational Genomics at Keck School of Medicine of USC, said they used this approach to study a commonly examined cancer line. But surprisingly, they uncovered the complexity they did not expect. A mixture of different types of cells was present in the cell line, establishing the genetic diversity of cancer tumors.

The journal Nature Communications Biology published the study. Single-cell copy number profiling, a technique developed by 10X Genomics with novel analysis methods, was used by researchers in this study.

To resolve overall clonality and complexity, they conducted a shallow single-cell DNA sequencing of 1,475 cells from a cell-line called COLO829. Multiple technologies have characterized the melanoma-tumor cell line before, and its a benchmark for evaluating somatic alterations.

At least four major sub-populations of cells, also known as clones, were identified by researchers that would have mutated from the original cancer cell during the cancer cell line’s evolution. They identified distinct hallmark events that were validated within bulk sequencing and spectral karyotyping, based on clustering, break-point, and loss of heterozygosity analysis of aggregated data from sub-clones.

John Carpten, one of the study authors, asked, “What if there’s a small population of cells in a tumor that has acquired a change that makes them resistant to therapy?” That change cannot be identified by just taking the tumor, grinding it, and sequencing it.

But those specific populations of cells that acquired the change can be identified by going at the single-cell level. And this could help in the early development of treatment approaches.