Karnataka Chief Minister BS Yediyurappa will be laying the foundation stone for the much-awaited Bengaluru Life Sciences Park at Electronics City, with a view to attract investment, generate employment, and bring in innovation.

A public-private partnership with the government of Karnataka and private entity Labzone Corp will set up the 52.27 acres spread park at a cost of Rs 5,000 crore.

The idea of setting up the Bengaluru Life Sciences Park emerged 20 years back when the Karnataka Vision Group on Biotechnology was set up, said the IT and BT & Science and Technology minister, Ashwathnarayan. Finally, the efforts of Vision Group saw a result. Karnataka, particularly Banglore, will be showcased on top of the Biotech map of the world after the establishment of the park.

The first phase of the project will be equipped with the world’s best biotechnology infrastructure spread across 9 million square feet and is expected to be completed by December 2022.

The life science park will be set up in the Electronic City of Banglore, near the IT hub. The park will be constructed in the space where the Biotech innovation center and other facilities are already present.

The park will attract key biotech players from across the world to invest and utilize the integrated park, which is already in huge demand. The chairperson of the Vision Group on Biotechnology, Kiran Majumdar Shaw, said his goal is to put India and Karnataka on top of the innovation map of the world, which had to happen long back.

Once the park is established, it will have a customizable, fully fitted lab, office suites, and a dedicated incubation space with shared instrumentation lab facilities.

The third component of the Biohelix Park will be a 52-acre industrial cluster that would strengthen the biotechnology ecosystem of Karnataka. Cutting edge R&D is expected to be carried out in the Biohelix Park, in an Institutional Area of 20 acres.

CEO of Bangalore Life Sciences Park, Chirag Purushotham, said that 60% of the park would be exclusively dedicated for a lease period of 64 years to industry cluster development of Biotechnology in PPP mode.

Currently, India has a total of 35% share in Asia’s biotechnology space, and Karnataka alone holds a 9% share. Around 60% of major biotechnology firms in the country are located in Banglore, with 200 start-ups and 380 companies. The life science park at Banglore will offer around 50,000 employment by housing more than 150 companies. 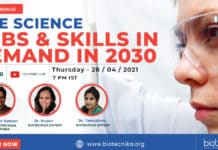