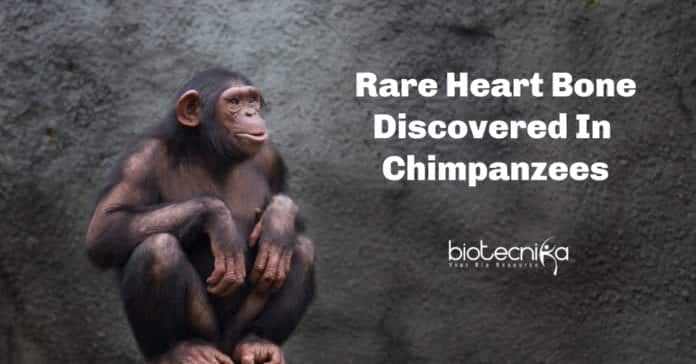 A rare heart bone was discovered in some chimpanzees by the scientists of the University of Nottingham. The heart bone is called ‘os cordis’. The bone could be essential in managing their conservation and health. Only a few animal species have this ‘os cordis’.

Thie study was performed by scientists from the University’s School of Veterinary Medicine and Science, and the study is published in the journal of Scientific Reports.

Cardiovascular disease is very common in the endangered wild chimpanzees. In making medical advances and managing their health and conservation – the key factor is understanding their hearts.

The small ‘os cordis’ heart bones of a few millimeters in size, were more probable to be present in chimps with idiopathic myocardial fibrosis – a type of cardiovascular disease discovered in chimps and humans. This cardiovascular disease is the most usual type of heart problem in chimps. Myocardial fibrosis has been linked to the occurrence of sudden death and cardiac arrhythmias.

Dr. Catrin Rutland from the University, said “The exploration of a new bone in a new species is a rare event, specifically in chimps which have such similar anatomy to humans. It increases

the inquiry regarding whether some humans can have an ‘os cordis’ as well”.

These extraordinary new findings were made possible using numerous methods including an advanced imaging technique – micro-computed tomography. This allowed the hearts to be scanned at much greater magnifications than a basic medical facility or vet CT scanning.

Dr. Sophie Moittié, from the University, said, “Looking for methods to help chimps with cardiovascular disease is crucial. Managing their health will be a lot more easier if we understand what is happening to their hearts”.

In lots of bovines including cattle, ox, and buffalo ‘os cordis’ bone is found and is commonly quite large, butchers also remove it in some cases so that meat can be utilized for soups. In some cases, lamb, otters, dogs, and camels have the heart bone as well. Often ‘os cordis’ exists in most animals of a species yet it is linked with cardiovascular disease in other cases.

The feature of an ‘os cordis’ is still being investigated, however, this function shows that cartilage was present in addition to bone, which gives an understanding into the bone development mechanisms. The heart bone was present in varying ages of male and female chimps, as per the researches.

Numerous suggestions have actually been given for the factors behind developing an ‘os cordis’. The bone might support the necessary heart valves, perhaps modify the electrical system which regulates the heart or develop due to cardiovascular disease.

Dr. Rutland, added, “Researchers and veterinary professionals came together for this research, working with a common aim to advance chimpanzee conservation and health“.