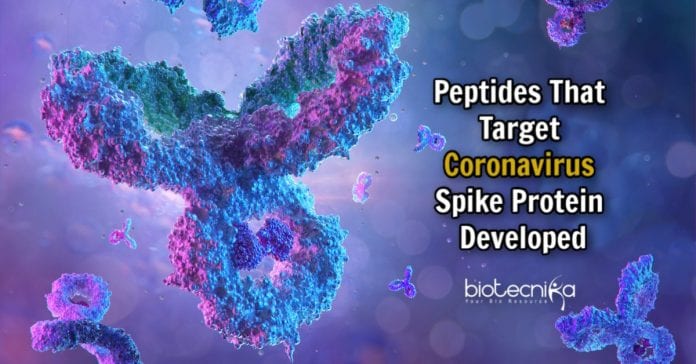 Researchers at the MIT Media Lab and Center for Bits and Atoms, using computational models of protein interactions, designed peptides that can target coronavirus proteins and shuttle them into a cellular pathway that breaks them down.

This peptide could prevent the novel coronavirus from replicating within the infected cells, holding the potential to treat the deadly COVID-19.

The researchers’ goal was to design a peptide that could be therapeutic against the novel coronavirus SARS-CoV-2. The peptide can tag and degrade the virus, once it’s inside the cells.

The researchers have already studied the efficacy of peptide in human cells; they are now planning for animal studies for further studies. The results got published in a preprint posted on bioRxiv on June 1, an online preprint server.

viral proteins. The peptides were designed in such a way that they can recruit proteins called E3 ubiquitin ligases, which can mark the viral proteins for destruction.

The researchers used a computational model of protein interactions to generate their spike-protein-binding properties. They trained their model to optimize the bonding strength between two proteins. Chatterjee and others recently used a similar computational technique to improve versions of enzymes used in the CRISPR genome-editing tool. When the most commonly used enzyme Cas9 can only target 10% of DNA sequence, their new enzymes can target more than 70% of the genome.

In this new research where they developed peptides that target coronavirus, the researchers started with the ACE2, a protein found on certain human cells, to which the novel coronavirus binds. ACE2 was broken into small fragments using their model and predicted computationally how fragments would interact with the viral spike protein.

They carried out their research in three steps; first, they designed peptides to have a strong binding affinity to the spike protein; second, they made sure the peptides can strongly bind to the SARS-CoV-2 virus. Finally, they established that the peptides wouldn’t bind to human proteins called integrins to which normally ACE2 receptors bind.

They found 25 candidate peptides and fused them to an E3 ubiquitin ligase. They tested this in animal cells that expressed the receptor-binding domain (RBD) of the spike protein.

One of these candidates peptides, which is composed of 23 amino acids, broke down 20% of the RBD of the spike protein. But compared to ACE2 protein, which broke down 30% of the RBD, this peptide did not work well. So to improve the efficiency, they computationally tested how the binding of the peptide to the RBD would get affected if substituted different amino acids at each of its 23 positions. This led to the development of a mutated peptide that enhanced the degradation rate to 50%.

One major advantage of this peptide is its small size. The entire chain is just 200 amino acids in length, even after fusing with E3 ubiquitin ligase. And the DNA or RNA encoding this peptide can be delivered to cells using harmless viruses called adeno-associated viruses.

The peptides can be delivered on its own, and this will allow them to bind to the spike protein outside the cells. Once the virus enters the cell, the peptide will trigger its destruction.