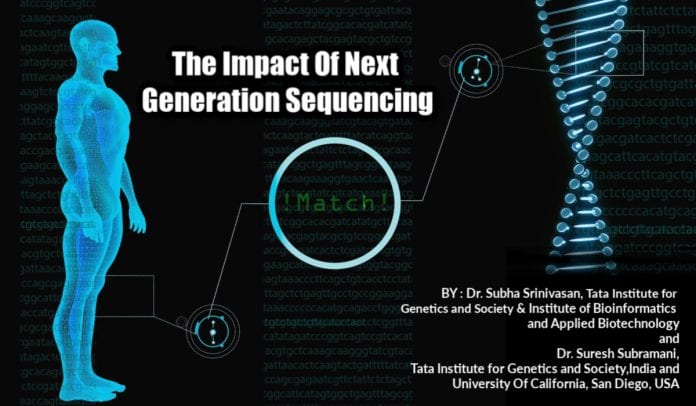 Next-Generation Sequencing (NGS) denotes high-throughput sequencing in a massively parallel fashion that brought a huge impact at far lower cost using a variety of novel platform technologies. With its ultra-high throughput, scalability, and speed, NGS enables many applications that require sequences of DNA and/or RNA. The applications include whole-genome sequencing (WGS) of organisms that have multiple, large chromosomes requiring sophisticated algorithms for sequence assembly, analysis of temporal and spatial patterns of RNA expression, annotation of novel genomes and their encoded genes using bioinformatic tools, studies on the epigenetic changes in genomes, and analyses of single nucleotide polymorphisms and genetic signatures that either predict genetic disease susceptibility or the presence of desirable genetic traits. NGS also provides deep insights into the biological diversity and evolutionary history of populations, whether they are of viral, microbial, plant, or human origin.

Maxam and Gilbert in the late 1970s led to the automated DNA sequencers developed by Applied Biosystem Instruments (ABI), which combined the dideoxynucleotide chain termination chemistry of Sanger with fluorescent dye-terminator reagents for single-reaction sequencing, rather than employing the usual four separate reactions to monitor the incorporation of A, G, C or T nucleotides during DNA synthesis. Since then, multiple waves (second, third, and now fourth generation) of platform technologies have led to what is currently known as NGS.

The word Next in NGS signifies the technological leap accomplished between each generation. The most tedious step of cloning in first-generation sequencing was entirely eliminated by replacing it with massively parallel polymerase chain reaction (PCR) amplification of hundreds of millions of short DNA fragments. Examples of platform technologies used in second-generation instruments include pyrosequencing (Roche 454), reversible termination (Illumina), ligation (Sequencing by Oligonucleotide Ligation and Detection or SOLiD) (Life Technologies and Applied Biosystems Inc), nanoball/ligation (Complete Genomics and BGI Shenzhen) and ion detection (Ion Torrent).

NGS technologies bet on parallel advances in computational prowess to handle and extract information from massive amounts of redundant and fragmented sequence data. The success of NGS has therefore been empowered by parallel advances in cloud computing, visualization tools, and bioinformatics algorithms. As an example, in the age of COVID-19, these innovations have allowed scientists to seek answers to novel biological questions such as the origin of SARS-CoV-2, how it has spread around the world, its mutation rate in real-time, how it is related to other coronaviruses and how it is evolving as it spreads around the world, within weeks to a few months of the outbreak.

The parallel advances in NGS, cloud computing, and CRISPR-Cas9 based engineering tools, when combined with a surplus of quality data, have created a perfect storm for the innovation of many diverse applications that can translate the benefits of NGS to societal causes.

The diverse applications spawned by NGS have the potential to impact every aspect of human health, both within and outside medical practice. Additionally, NGS is already revolutionizing agricultural productivity and helping evaluate the roles of the gut, air, water, and soil microbiomes.

Another area is in the discovery of new disease genes, especially for multigenic disorders. NGS has contributed to significant growth in the rare genetic disorders reported in the Online Mendelian Inheritance in Man (OMIM) database (https://omim.org/), with over 15000 genes represented.

A major impact of NGS in medical practice is the improvement in diagnostics/prognostics for cancer, non-invasive prenatal testing for genetic/inherited disorders, and infectious disease.

In precision medicine, NGS has enabled tailoring treatments based on genomic and ethnic diversity. For example, the dose of the blood thinner, warfarin, is routinely adjusted based upon specific genotypes confirmed by genome-wide association studies and has significantly improved patient outcomes. The development of personalized cancer drugs, such as the BRAF (V600E) kinase inhibitor, RO5185426, effective only against tumors with the BRAF (V600E) mutation and the approval of the first personalized drug, erlotinib, based on mutations in the EGF receptor, are examples of NGS-based prognostics. The field of companion diagnostics, where a diagnostic test is used as a companion to a drug to determine its applicability to a specific person, is another area of medical practice impacted by NGS.

In clinical microbiology, whether infectious diseases are caused by bacteria, fungi or viruses, it is often easier to identify the presence of a novel pathogen and early signs or impacts of infection by NGS, rather than waiting for the symptoms to manifest or to address situations where the symptoms don’t point readily to a given pathogen. A perfect example of this is the current COVID19 situation with many asymptomatic carriers who may have the virus can be detected by NGS, even if they display no symptoms. Diagnostics practices based on culturing the pathogen can take days and are likely to be replaced by NGS.

The human body hosts many symbiotic, pathogenic, or commensal microbes that play an important role in human health and well-being. Metagenomic NGS of 16S ribosomal RNA is the tool used to identify the microbial populations and their perturbations in the human microbiome in normal or diseased human patients. As this field advances and we understand the consequences of microbiome perturbations in disease, therapeutic interventions are being used to cure certain diseases by manipulations of the microbiome composition.

NGS is also transforming the face of agriculture and making it possible to identify, track, and disseminate desirable traits and breeding decisions in plants and animals. With 40% of world food production being lost to disease and pests, NGS is helping to track the source of plant diseases and is suggesting ways of eliminating such diseases or pests. This has the potential of improving agricultural productivity at a time when land use is declining, the world population is growing, and the impact of climate change is increasing the biotic and abiotic stresses faced by crops. WGS of many major global crops has been completed in the past decade, as well as that for a few crops of specific relevance to the developing world, including cassava, yam, tef, pigeon pea, peanut, and amaranth.

Finally, NGS has a great impact on agriculture as it enables new gene editing, base editing, and prime editing technologies, which have the potential to revolutionize traditional plant breeding to improve plant and crop varieties.


See Also
Novel Coronavirus May have Been Circulating Among Humans Since 2013 : Study Suggests

Dr. Suresh Subramani received his PhD from the University of California (UC), Berkeley, USA. He joined the faculty at UC San Diego in 1982, after completion of post-doctoral work in the laboratory of Nobel Laureate, Paul Berg, at Stanford University (1979-81). He is the recipient of many honors and awards and has been involved in many leadership roles in academia and in the biotechnology industry. He is currently a Distinguished Professor (Emeritus), the Global Director of the Tata Institute for Genetics and Society (TIGS, at UC San Diego, USA, and at the Institute for Stem Cell Biology and Regenerative Medicine (inStem), Bangalore, India) and holds the Tata Chancellor’s Endowed Professorship in Molecular Biology at UC San Diego. 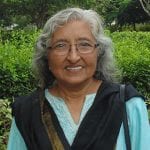 Dr. Subha Srinivasan leads TIGS’ bioinformatics research efforts at the Institute of Bioinformatics and Applied Biotechnology (IBAB). She completed her PhD from the Center of Advanced Study in Biophysics, University of Madras, and post-doctoral research from the Roswell Park Memorial Institute, New York, USA. She founded and served as the Chief Scientific Officer of Jivan Biologics, which specializes in microarray services for alternative splicing. Her team at IBAB applies genomics and bioinformatics techniques in cancer biomarker discovery, plant and insect genomics, root metagenomics, nutritional genomics, and non-invasive diagnostics.

About Tata Institute for Genetics and Society

The Tata Institute for Genetics and Society (TIGS) is an institution committed to making scientific advances in research on human health and agriculture, particularly to benefit India and the Indian population. The institute works on areas that require immediate and synergistic efforts that are relevant to India. This is one more key investment made by the Tata Trusts, India’s oldest, non-sectarian, philanthropic organization, which has for over 125 years pioneered such investments in education, infrastructure, healthcare, IT and other technologies with an aim to benefit Indian society. True to Tata Trusts’ philanthropic vision, research groups at TIGS are working on applying new tools and techniques in genetic engineering for improving health security and food security in India.