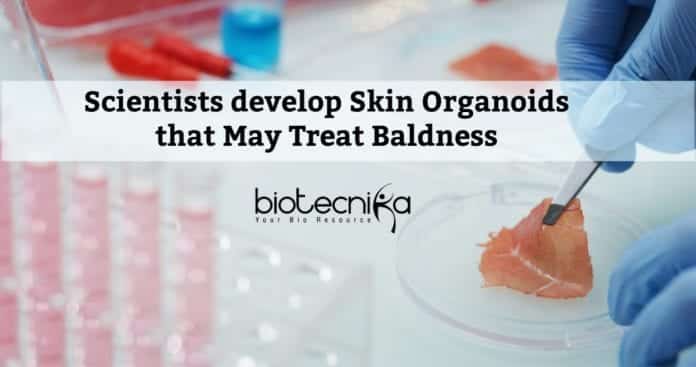 The first hair-bearing human skin organoid made with pluripotent stem cells has been created by the researchers.

Karl Koehler, Ph.D., at Boston Children’s Hospital and formerly of Indiana University School of Medicine led the organoid’s development. As a post-baccalaureate research technician in the Stanford University lab of Stefan Heller, Ph.D., a graduate student Benjamin Woodruff from the Oregon Health & Science University contributed by helping make the organoids.

The investigators wrote, “Guarding against external stresses and mediating the sensation of touch and pain, the skin is a multilayered organ, equipped with appendages (that is, follicles and glands), that is critical for regulating body temperature and the retention of bodily fluids. A biomedical challenge that has yet to be met is reconstructing appendage-bearing skin in cultures and in bioengineered grafts. Complex skin from human pluripotent stem cells generated from an organoid culture system has been reported here. To co-induce cranial epithelial cells and neural crest cells within a spherical cell aggregate, a stepwise modulation of the transforming growth factor β (TGFβ) and fibroblast growth factor (FGF) signaling pathways has been used.”

“The emergence of a cyst-like skin organoid composed of pigmented hair follicles that are equipped with sebaceous glands, fat-rich dermis, and stratified epidermis was observed during an incubation period of 4–5 months. The neural circuitry associated with the human touch is mimicked by the nerve-like bundles formed by a network of sensory neurons and Schwann cells that target Merkel cells in organoid hair follicles. Direct comparison to fetal specimens and single-cell RNA sequencing suggests that the skin organoids are equivalent to the second trimester developing human fetuses’ facial skin. Additionally, it is shown that when skin organoids are grafted onto nude mice, they form planar hair-bearing skin. Together, it is demonstrated from the results that nearly complete skin can be used to reconstitute skin in vivo and can self-assemble in vitro. A foundation for future studies of human skin development, reconstructive surgery, and disease modeling are can be provided by the developed skin organoids.”

Completing his first year of cell and developmental biology graduate studies at OHSU, Woodruff explained that, “Without having to take hair from a human, it is possible to produce human hair through this. We can have an unlimited source of human hair follicles for research now for the first time.”

Researchers can have clues needed to reverse a retreating hairline and can understand hair growth and development with the help of having access to more hair-growing skin.

The team published its research in Nature.